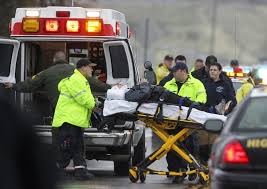 In Arkansas, a paramedic was caught for cutting off an expensive and luxurious diamond from a deceased person’s finger. The paramedic was trying to sell it into the pawnshop.

The person accused of this case is Lisa Darlene Glaze, who comes from the place of Hot Springs. She was caught red-handed and is now behind bars for ten years. She is also confronting an offence of stolen property to a pawn shop that has the preponderance of one year in jail.

The patient, Gloria Robinson, had gone through surgery on October 16. She was rushed to the CHI St Vincent Hot Springs, where she as declared as dead. This was revealed as per the information on the reports.

It was when Robinson’s belongings were given to her family that they claimed that three of her rings were missing. When Lisa was asked about it, she said nothing. It was two days later where a relative at Fuller Hale South Funeral Home where they got a bag that had two of her rings. The third ring was still missing.

It was both, her husband and her sister who confirmed that she had stolen the ring that belonged to Gloria. At the pawn, when Lisa was selling it, she had shown her Driving License, which made it easier for the police to capture her. She sold the diamond ring at the rate of 45 dollars. The pawnshop employee had verified that it surely was Lisa who sold the stolen ring.

A warrant was given to Lisa Glaze, who was discharged from jail $4,500 bond. She has been scheduled to visit the court on November 26 at the Garland County District Court. Thus, this is the case of the paramedic who was caught for stealing an expensive ring from a dead person’s finger.