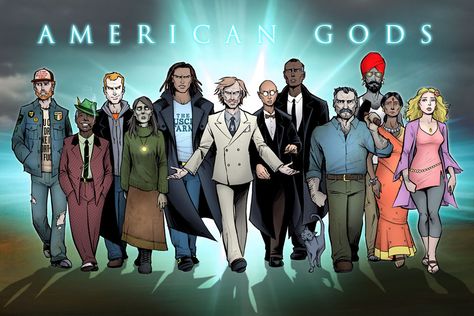 Over the years, the migrants coming to America have carried a lot of Gods along with themselves. They range from the African Trickster to the Slavic Deities, but they have been forgotten through centuries. The show is about the war between the two sets of deities, the forgotten ones and the currently followed ones.

There is no official release date for the third season of the Amazon version of the highly popular novel. It is expected to be released in the last quarter of 2020.

The show will be retaining most of the main characters like Ricky Whittle as Shadow Moon, Ian McShane as Odin or Mr Wednesday, Emily Browning as Laura Moon and Crispin Glover as Mr World.

The Ozzy Osborne lead musician Marilyn Manson is the latest addition to the cast as Johan Wengren, the “Nordic Death Metal Front man”. He is related to Mr Wednesday through the “Viking Metal Band”, the Blood Death.

Chic Eglee went on record praising his ‘boundless enthusiasm’ for the role Johan, a Norse ‘berserker’ in service to Odin and we can expect his performances to be entertaining and disturbing.

Legendary actress Blythe Danner is set to appear in four episodes as Dementer, the Greek Goddess of harvest and has a romantic past with Mr Wednesday. She is expected to bring elegance and grace in the role.

IMDb rated the show with a respectable 7.8/10, which is appealing, as previously attempted shows on Gods have sometimes ended up being a complete disaster.

The third season was supposed to finish filming in early March this year and subsequently release it in the following months but the plans for the 4th season are already in place. Nothing has been officially confirmed, but sources close to the show have revealed that the 4th season will start with the production in 2021.

What God is Shadow Moon?

The Shadow Moon is actually a demi-god, the son of Odin and a human woman. As we know, Mr Wednesday is Odin and this could possibly be the reason why he chose Shadow Moon to play an important role in the war between the old and new Gods.