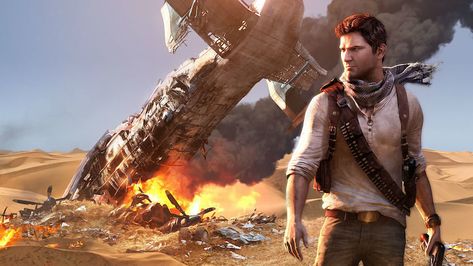 Uncharted is an action-adventure game series developed for PlayStation consoles. Naughty Dog created it and Sony Interactive Entertainment published it. It revolves around treasure-hunter Nathan Drake who travels to various places across the world to unravel historical mysteries.

The first installment Uncharted: Drake’s Fortune premiered in 2007 on PlayStation 3. Since then, there have been several installments and spinoffs. The last one, Uncharted: The Lost Legacy released in 2017. It was a standalone game to the series, with Chloe Frazer as the playable protagonist. The series is commercially successful and is considered as one of the biggest video game franchises of all time. It has often been compared to Hollywood action films.

What are the reports about the film adaptation of the game?

The game series had a unique cinematic approach because the characters were far more visually developed than other game series. People who have closely followed the series throughout the years believed that it could be adapted into a movie. Fans often said that they wanted to watch Nathan Drake on the big screen.

Sony had first talked about the potential film back in 2009. Apparently, it was supposed to have seven directors attached to it. But the reports were never officially confirmed. But after years of waiting, sometime in March 2020, it was confirmed. The word came via IGN, during its conversation with Tom Holland at his new Disney Movie Onward’s premiere. The film also stars Mark Wahlberg as Victor “Sully” Sullivan. Antonio Banderas will also be starring in the film. Ruben Fleischer is directing it and Art Marcum and Matt Holloway have written it.

Is the Release date Final?

Uncharted is all set to release in theatres in The U.S on July 16th, 2021. Earlier, the date was finalized on March 5th, 2021, but the Covid-19 pandemic stalled it. Columbia Pictures, Atlas Entertainment, Arad Productions, PlayStation Productions, and Sony Pictures Releasing are all involved in the theatrical release.

Both Tom Holland and Mark Wahlberg are much younger than their video game counterparts Nathan Drake and Victor Sullivan. This makes complete sense that Uncharted will be based on Nathan Drake’s origins. The plot will perhaps revolve around how Nathan comes to meet his mentor.

What makes the movie a whole lot better than the games?

Holland had dropped a hint that the movie will be based on Uncharted 4: A Thief’s End, the fourth installment in the gaming series. Since Uncharted 4 heavily featured flashbacks to Nathan’s childhood, it totally makes sense that the movie will take us back to his roots. It might even give us a peek into the dynamic between him and his brother Sam. But this is just a theory. The fact that after years of waiting for the film will take us back to Nathan’s childhood, is supposed to make the experience a whole lot better than the previous gaming series.