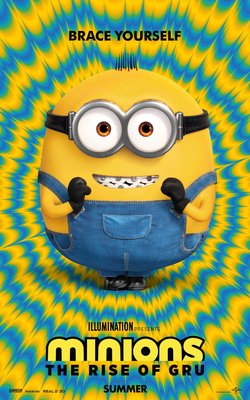 Minions have become a massive part of our pop culture with their cute appearance and witty behaviour. It all started with Despicable Me. The movie revolves around a rising Supervillain who wants to capture the moon and does it with his loyal group of minions. Now every supervillain has minions, but this chubby little lot took away the audience. The Creators Pierre Coffin and Kyle Balda had to respond to the fans with a Spinoff movie called ‘The Minions’, which was a hit, the day the trailer came out.

Minions: The Rise of Gru  Release Date and More

We have the official trailer out, and it’s gone viral. The confirmed release date is on 2nd July 2021. So lets finally talk about and what do we expect from it. In the first movie, we saw the Minion origin story and how they were destined to meet Gru. They worked for a lot of other villains on their way but finally settled for Gru. It’s crazy how Gru can recognize all of them. The next movie’s plot is pretty much in front of our eyes.

We saw the trailer, and in it, Gru’s childhood is shown, its sort of a prequel for the first Despicable Me. God’s Origin story. We see him as a kid, and he goes to the Vicious 6 for an interview to become the most dangerous villain. The Vicious 6 mocks him for being a kid and Gru steals their talisman to prove himself pretty despicable.

The real problem arises when one of his minions, Otto, trades the talisman for a pet rock with google eyes. Now the question is how will Gru get it back before the Vicious 6 finds him.

Why Do Some Minions Have 1 Eye?

So we’re supposed to answer these questions now, well, fine, here you go. The more obvious reason why they have one or two eyes is that it is used as a plot device so that the Minions can be distinct to movie viewers. Now if you’re watching Minions and are looking for logic, do you think you’ll get any, its an animated movie.

Why Do Minions Love Bananas?

Minions love bananas because the creators of minions may have decided to make them love bananas because when a minion says banana it sounds way too funny. Any other fruit or veggie may not have looked as funny as a banana. Bananas are the most popular fruit in the world. Bananas grow almost everywhere on this earth. So here you go.