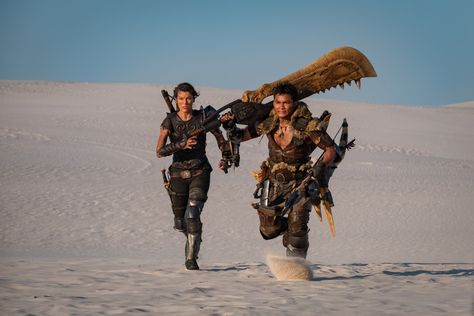 If you are a gamer, you must remember this, Monster Hunter used to be super fun and also had an open world system. The name is quite self-explanatory. You are in a world where the elders teach you how to survive in the world of mysterious monsters. You get crazy weapons and powers to unlock and a whole new dimension to explore. You can capture or kill huge monsters like dinosaurs or dragons. So it’s a fun game.

This movie has been under production for a really long time. The creator  Paul W. S. Anderson began with the production in 2018 and it was complete by December but wasn’t released. We have a release date and it is September 4th, 2020.

The movie has been in conception since 2012 and finally, we have a date. This sci-fi fantasy has some legendary characters in it and who better for a monster movie than Milla Jovovich. Shes got a lot of monster experience from Resident Evil and now she’s looking for bigger monsters. We have Tony Jaa, Ron Perlman, T.I. and Meagan Good.

This live-action monster-killing fiesta is going to bring out the best kind of visual effects and the thrilling story is a bonus. The creators say that the plot revolves around a team of the United States military that falls into a portal. The portal then leads to a world of different prehistoric creatures.

The team has to survive there, find a way to the portal, and make sure that the creatures don’t find it before them. The last thing they want is a dragon invasion on their hands. We are pumped to see this and just hope that the pandemic doesn’t delay the release dates.