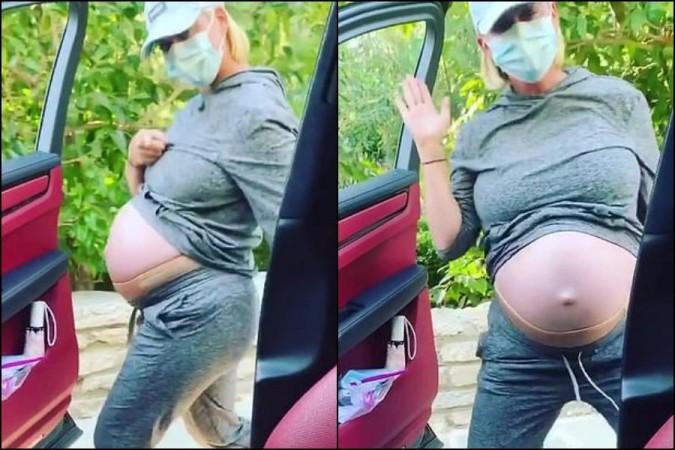 Challenging each other to do different dares is the new trend of social media. It is the same for both Bollywood and Hollywood. Celebs challenge each other and the replies to the challenges go viral in minutes. But now singer Katy Perry has done something really daring and funny too, which took no time to go viral.

She just jumped out of a car with her baby bump and showed some hilarious moves.  She didn’t seem to be worried at all about the fact the she is going to give birth to a baby any fay now. Katy’s moves were not only appreciated by her Fiance Orlando Bloon but he shot the video on his phone too. He drove alongside her while capturing her dance. In a tracksuit along with wearing cap and mask, the Grammy nominee of 13 times just showed her magic.

In the video, at first Katy was seating quietly when Orlando asked her what is the day, calling her ‘honey’. In response, someone was heard to be saying referring Tiktok personality Mufasa that ‘It’s Friday then.’ After that came the moment when Kary got out of the car and started to dance. When Orlando started to drive the car slowly, Katy also walked while dancing, keeping in pace with the car. Off course, after she got out and before she started moving her legs in beats, Katy pulled her hoddie up to show her baby bump. Her moves not only was with the beats but also very dramatic.

Kary Perry informed all the fans about her pregnancy in March with limitless joy and debuted her baby bump on Never Worn White video. Recently Katy shared the feelings of carrying the baby in this pandemic situation. She mentioned, “it’s a little bit more like water off a duck’s back.”