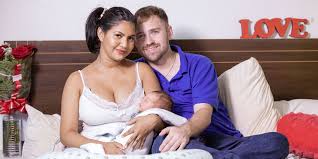 Paul Staehle who had starred in 90 Day Fiance and Karine Martins are not in good books of each other in spite of being a couple. They have had bad relations since a while. In fact, a few days back Paul Staehle had put their fallout on social media to be streamed live.  There was a fight and Paul had been telling Karine, not to take away their son. This fallout has been quite popular and even the policemen had to come and sort this out in between them.  So, after this fallout Paul has filed a protective order.

This matter has now gone to the court of law and that even though they are staying away from one another; they still have a fight in some or the other way.  Karine made allegations against Paul telling that she was victim of marital rape. On the other hand, Paul reverted that he had found broken glass in his food.

The relations among them are as bitter that as per Paul, one of Karine’s friend has been demanding money and if he didn’t give then she would kill him. Also, the friend threatened that he won’t be able to see his son again in life.

Paul also said that Karine was not a good mother and she did not take good care of their son. She would allow their son to run on the streets and also get into the chemical cabinets. He requested to rely on CCTV footage for these things. There was this footage of the security camera that he said to depend on.  Further, Paul also thinks that Karine is not mentally fit to take care of her and also of their son. In fact, he also feels that it would not be safe to leave their son along with her.

A lot is happening bitter in this relationship and this has been the case since the start!