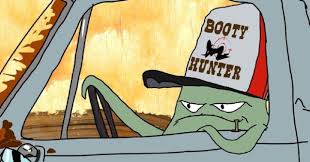 Famous movie maker Adult Swim’s Squidbillies animation series has landed in a new controversy. This time it is because of an actor’s sexist and racist facebook post which created a stir on social media circles. The actor’s name is D.Baker (you do need to Google it!)

The show deals with a family of a redneck species of squids and this series has been a cult-classic amongst the fans for a very long time thus this shows how the show has managed the audience so far. In order to maintain such damage Adult Swim thought of firing the actor at once.

This show which is running from more than a decade and half time period goes back to 2005 and this satire genre cartoon series has produced more than 120 episodes till this very date and people just wants to see more extra. Baker uses the title name of Unknown Hinson and has given his voice for the main character Early Cuyler from the start of the cartoon animated series. Now the actor’s swift firing without reason has now come to many of the series crazy fans.

Today Squidbillies is a brand and everyone watches even the old episodes in their free time. The show team officially announced that Baker is no more part of the show and has been fired. Social media is divided between the fans who are justifying the step and the diehard fans who are demanding the actor’s return.

In actuality Baker had put forward derogatory remarks against Dolly Parton for voicing her support towards the  #Black Lives Matter movement which started after the infamous George Flyod death case. He accused her of forsaking her very own race, culture and heritage which according to him was anti-national. So with Baker we will have to see what is left of the show Squidbillies or it will be contrast thing this time ?