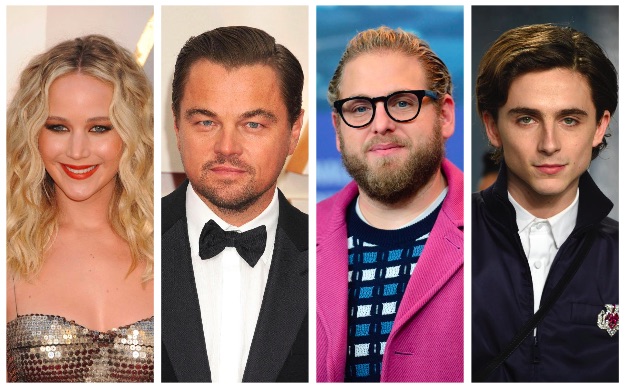 Leonardo DiCaprio will be co-starring in Adam McKay’s new Netflix comedy titled “Don’t Look Up”, alongside Jennifer Lawrence and other Hollywood celebrities.

After his Oscar nominated movie “Vice”, about former Vice President Dick Cheney, McKay returns with a brand new project that boasts of a star studded cast like no other, including Meryl Streep of “The Devil Wears Prada” fame, Timothee Chalamet who played Laurie in “Little Women”, alongside other notable names in the industry.

Plotline Of The Movie

Written and directed by Adam Mckay, and produced by Netflix, the story revolves around two astronomers, played by DiCaprio and Lawrence, who aware of an asteroid on its way to collide with the earth, try to warn the public about the disaster that is about to strike, but in vain, as people refuse to pay any heed to their warnings.

The COVID-19 pandemic may have thrown the movie’s original plans of a December release off course, but as per their revised schedule, the filming process has officially  begun from November 19th, in Boston, and the movie is now scheduled to release on the popular streaming platform, Netflix, sometime in 2021.

Filming Amidst The COVID Scare

The cast and crew are taking all the mandatory precautions and abiding by the protocols as per guidelines mentioned by the CDC and local authorities to ensure everyone’s safety. Additionally, all the members have undergone COVID tests and have been quarantined for the due course.

Other celebrities who are a part of this much anticipated movie include Himesh Patel, Jonah Hill, Matthew Perry, Kid Cudi, Cate Blanchett, Ariana Grande and Rob Morgan.