Natalie Portman specked in Sydney, Australia after filming for the Marvel Movie -Thor: Love and Thunder. While shooting for the flick, she is exploring some tourist places just like other local people in the city and wandering herself.

Natalie Portman is an American actress who began her career at a very young age and progressively pursued her career. She has been playing the female protagonist as Jane Foster in every Thor sequence.

Thor: Love and Thunder is the fourth installment in the Thor franchise which has resumed its filming process in Australia after taking Covid- Protocols from spreading the Virus widely and will be out by 2022 end after the completion of their filming.

Natalie Portman dresses in her Casual wear during sightseeing in Sydney:

She is wearing a loose-fitting blue with a white pinstripe shirt and denim shorts just gawking Fab in that casual dress. To make the outfit even more classic, she is wearing a black strappy sandal with a fedora Hat to harmonize her sightseeing setting. She is also carrying a violet flap bag and doing soft makeup. 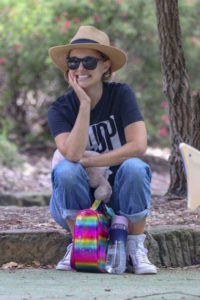 Is she going for the film or on a vacation with her family in Sydney?

Thor: Love and Thunder movie is expected to start its film in January 2020, but as the current circumstance holds the industry halt so the crew working in the script and getting ready for the further procedure if things get well. Earlier In September  2020, the media noticed  Natalie outside at Sydney’s Fox Studio for her film Thor: Love and Thunder Pre-production so maybe the movie resumed to work.

Natalie officially took off to Sydney to have a fun vacation with her family- son Aleph, daughter Amalia and with her husband Benjamin Mildepied. The Actress arrived in Sydney by her private Jet and the following day she went to the shore with her two children where she was carrying a pink bag for her child and exploring local areas.