Actress Tamanaah Bhatia is a gem to the entertainment industry of India. She has given hits like Baahubali and other such fascinating movies. She is what we can also call the beauty queen. She is a successful actress with lakhs of fan followers. The actress styles in different attires makes her look amazing in both Western and Indian wears.

Well, other than Western wears the actress has a good collection in some of the traditional wear too. She has a good taste in Salwar Kameez and the outfits are outstanding. Her look will definitely steal your heart away. 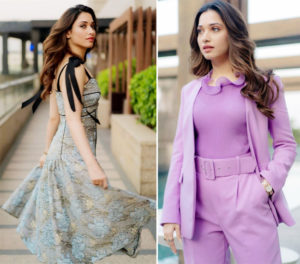 Tamanaah Bhatia is one of the most beautiful actresses that the world has ever seen. You might have noticed in her movies that she looks stunning and gorgeous whatever outfits she wears. There are only few actresses who looks good both at Western and Indian attires. Tamanaah beats all of them I must say.

The 30-year-old actress was tested positive for the Corona virus just two months ago and she has been recovered fully. Fans are happy to see her well and in good health. We hope that she will soon start to be seen doing movies because the fans wants to see her in the big screen.

The actress was last seen in a Telugu movie named Sye Raa which was released last year. This year she has not done any movies because of the lockdown period due  to the corona virus. Well, we wish to see her soon and wish her all the luck for her future.