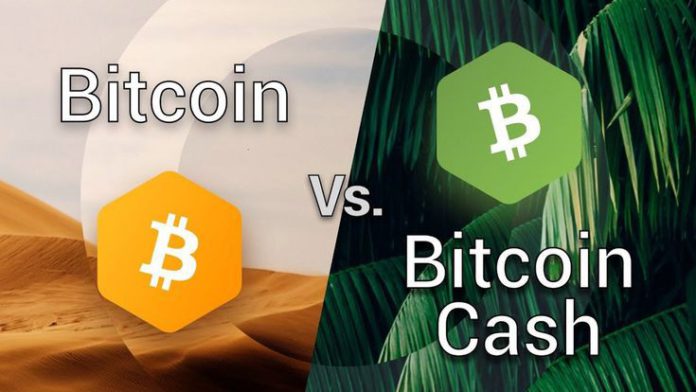 Bitcoin is one of the current hot topics including Bitcoin cash price predictions. But when it comes to Bitcoin vs Bitcoin cash, there has been the following questions in everyone’s mind :

So let’s get to know all about it.

First of all, let’s simply understand about basics of Bitcoin Cash and Bitcoin cryptocurrency. We can understand Bitcoin cash as a kind of proxy Or alternative to Bitcoin, as it is a better investment for smallholders because Bitcoin cash has low nominal value than Bitcoin.

Moreover, it’s only when 70 Bitcoin cash is combined, they make up to 1 BTC. Bitcoin cash has recently got a lot of positive response in the market and has become the 9th biggest digital currency with a jump of more than 34% in the last week. Keep reading to know about Bitcoin Cash Predictions.

This is the difference between Bitcoin and Bitcoin cash on basis of market value, but on a philosophical level, they have a difference in their way of dealing. Bitcoin cash came up in forward to increase the number of transactions.

Well, the digital currency is walking on a positive and ascending wedge, but at the same time, it also awaits a “downswing” in the near future. And this decrease can range up to 19-20%. Bitcoin price predictions can be uncertain but we can expect it to go down as much as $560 which is right now at around $719.

Talking more of it, the Market is always on that 2 sided edge of a sword, in which both Bulls and Bears have a great impact. So yes, there’s also another angle for Bitcoin cash predictions. Yes if BCH Bulls are able to hold a strong position and are able to hike the price to around $745, then the picture can change excitedly and Bitcoin cash will lead to a huge $830.

In fact, that it has grown to more than 259% from last year. Overall, it has got potential to increase up to $1000. But future is uncertain it might have to go through that downfall up to $500-600.

For more updates stay connected to The Global Coverage