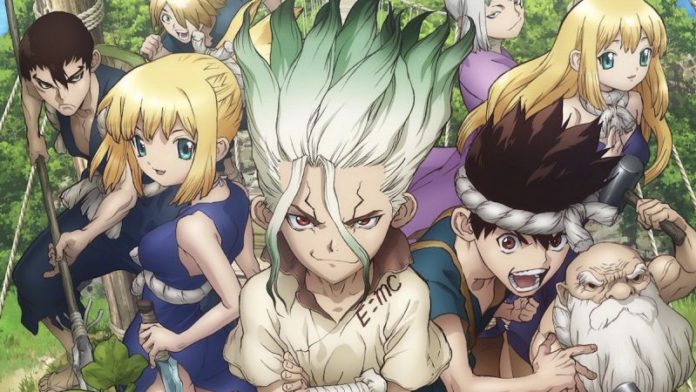 Update Alert! The makers are set to release the next chapter of the famous show Dr stone. Keep reading for all the updates regarding Dr Stone Chapter 188 Release Date, and Spoiler.

The Dr stone series is inscribed by Riichiro Inagaki and further illustrated by South Korean artist Boichi, Dr Stone. The manga drama, Dr Stone began its serialization in the columns of Magazine in March 2017. By January 2021, the chapters were gathered and published by Shueisha into 19 tankōbon volumes. The series gained so much support from fans worldwide. Later, Viz Media licensed the manga for English release. Currently, it is about to air its Dr Stone Chapter 188.

Dr Stone’s craze became so dominant in the community that TMS Entertainment adapted this masterpiece into an anime that aired in 2019. The number of copies in the distribution of the Dr Stone series prints has crossed 8 million by 2021. The series even won the 64th Shogakukan Manga Award in 2019.

Before moving forward with Dr Stone Chapter 188, let’s get a quick recap of what happened until now. In chapter 187 of Dr Stone titled “Cyber Guerilla”, we saw that the Senku team had a visible edge over Stanley’s crew as they know the exact location of Stanley’s team. To Senku’s surprise, Kohaku already ran off alone to face Stanley’s crew as they had Suika, Francois, Ginro, and Matsukaze in their captivity. Though to everyone’s surprise, Kohaku held herself from attacking headfast and analyzed the situation to formulate an attacking plan. As she soon realized that Maya’s team form had no flaws she was soon accompanied by Tsukasa and Hyoga.

After the trio assesses the situation they decide that they have to deviate the enemy’s attention by using the record traps that Chrome made to give the impression of gunshots as they will be able to finish this war between the American Colony and the Kingdom Of Science by destroying the transceiver belonging to Stanley. We even see the flashback where Chrome and Senku contemplate how to record gunshot sound on the record traps. The moment Maya’s team hears those gunshot wounds they retaliate with gunfire which sends their formation into disarray. Though Maya’s natural instinct kicks in and she locates the trio and unleashes her attacks in a fury. It would be really fascinating to see what happen next on Dr Stone Chapter 188. Fans will witness the further anticipated fight between the two MMA fighters Maya and Tsukasa. It is going to release on March 7, 2021. The upcoming chapter will be focusing on Maya entirely. Meanwhile, Hyoga and Kohaku focus on destroying their transceiver and rescuing the hostages.