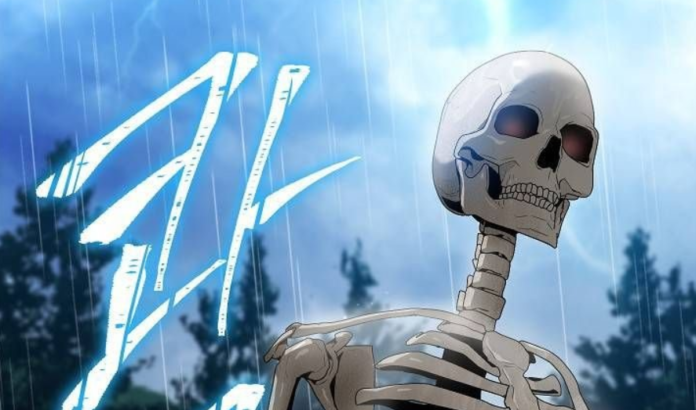 The Sosori written manhwa “Skeleton Soldier Couldn’t Protect The Dungeon” will be coming back very soon with its Season 3, as Skelly has resurrected for the tenth time. The plot revolves around the time skip of a Skeleton soldier who couldn’t protect his owner in his first life. Every time Skelly dies he either comes back in time to the coffin where he was risen by Rae Rubia who is the daughter of the previous Lord of Erast. Each time our poor Skelly dies he goes back in time retaining not only his memories from each life but also most of his powers. Skeleton Soldier Couldn’t Protect The Dungeon Chapter 142

After absorbing the skills from the two-tower mages which were killed by Isaac, and also Lu-lium from Isaac’s dead body in Chapter 139, Skelly upgraded from skeleton soldier to Skeleton Knight and also received various job-specific upgrades too. By donning his newly acquired sword and also mounted his new skeleton horse and embarked on the journey to the imperial capital to avenge his previous life transgressions. When he reached main capital entrance he found that many of the wizards were killed including the tower masters. When he reached he found many enemies with the same familiar face of Leonardo who was obsessed by Imperial Worms and was nothing more than a puppet in the main villain’s hands.

Though the numbers were more than overbearing Skelly managed to land a few attacks with his newly acquired powers. But these new advantages didn’t prove much effective in front of the enemy horde which could regenerate if not killed in a single attack. As his attacks weren’t proving much effective Skelly found himself surrounded by his enemies. Using Gale to gain some altitude, his horse was soon struck down by Leonard. As a last resort, Skelly put his everything in his next attack and managed to slay one of them.

As Skelly began to absorb the recently slayed Leonardo, the others just waited for him to finish absorbing. Skelly speculated that the human side of Leonardo is still alive somewhere and is still adhering to the knight’s code of Chivalry. But this wasn’t acceptable by the man behind the shadows and forced the rest of them to attack Skelly together which marked the end of the 9th resurrection. After being resurrected for the 10th time, Skelly found himself within the coffin and found out that he had also inherited a few job-specific skills. But, to Skelly’s surprise, he couldn’t find Rubia anywhere around.

Season 3 which will begin Chapter 142 will be released in the coming week. Some speculate that it will release on 12 March 2021, but the days might differ according to different circumstances. We might see what happened to Rubia and if Skelly goes ahead to meet Isaac of his own will this time.