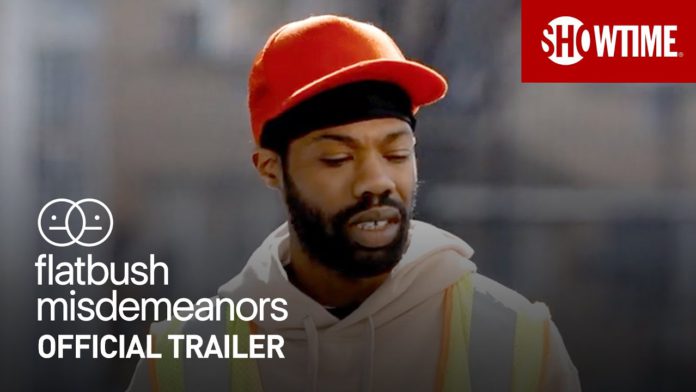 All these quarantine Periods, web series, and movies have been our partners in wiping out boredom. To help you scrap out restlessness, we are here to share about a fresh new upcoming web show which is hilarious and relatable. It is called Flatbush Misdemeanors. The name might be quite uncommon, leading to some curiosity. So, follow my lead to know more about the upcoming show

Flatbush Misdemeanors is a story set in Flatbush, Brooklyn, focusing on two main characters named Dan and Kevin. Dan and Kevin both are sorts of loners living together in solitary. Furthermore, these two characters are friends from way back in their teenage years. The show’s center of attention is to present the hardships faced by these two introverted individuals. Likewise, These two go through some tough times in settling in a bashful and assertive neighborhood of Flatbush, Brooklyn.

The show uses quick-witted dialogues with relatable grounds. Also, Flatbush Misdemeanors has some rude and raw comic scenes focusing on racial attributions also. In brief, the plot focuses on the portrayal of usual Brooklyn city life and how people connect to each other on the happening of certain unexpected events.

Moreover, The main plot of the show is based on Kevin and Dan’s web series which was released in 2017. As a matter of fact, it was highly appreciated also it won awards at London and Florida film festivals. Now, you must be anticipated to know about Flatbush Misdemeanors Release date.

Flatbush Misdemeanors Release date is all ready to be premiere in 2021 on the day of the official announcement for the commencement of the show shooting. But when?

Flatbush Misdemeanors is going to premiere on Sunday, May 23, 2021. The Web shows distribution rights are bought by Showtime. So, to watch the show you must visit Showtime. Further, Showtime would release the show on its official website at 10:30 am on May 23, 2021. According to recent reports, the show is going to have about 10 episodes releasing every week certainly and each episode is of 30 minutes individually.

After discussing the Flatbush Misdemeanors Release Date, Let’s move forward to know about the cast of the show- Dan Perlman and Kevin Iso play the protagonist’s fictitious role in the upcoming series. Moreover, They would also be seen handling mental health problems and solving hipster issues. Their names would be Dan and Kevin accordingly.

Kristin Dodson popularly known for the shivering truth would be seen playing an extrovert student of Dan. Zuri Reed would play the role of Dami and would be seen in 9 episodes of the show. Hassan Johnson in the role of Drew as a cold and outspoken person would create some dispute in the lives of Dan and Kevin by his absurd demands. Subsequently, Sharlene Cruz as Jess, Nastaran Dubai playing the showrunner.

Kareem Green playing Kareem, who is Dan’s Stepdad also he is a guide by profession in the neighborhood. Flatbush Misdemeanors comes from the intellect of this popular stand-up comedian Kevin Iso and Dan Perlman who have both co-created it and also co-starting in the show.

Hope the Flatbush Misdemeanors show what it wants to and hit its target audience. Wishing all good luck with the upcoming show.

Here’s the link to the trailer of Flatbush Misdemeanors.