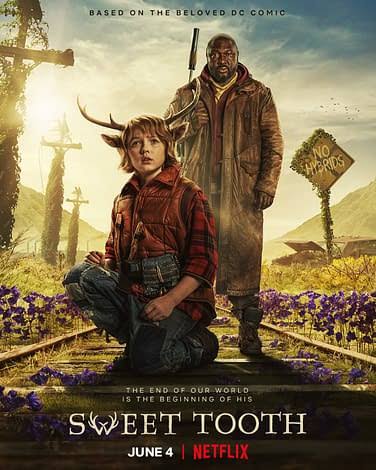 Sweet tooth season 1 is set to be released on Netflix globally on June 4, 2021. The storyline of this series is inspired by the famous DC comics. The name of the comics is the same as the movie. Moreover, With this movie, Netflix has set its steps on the footprint of DC comics. Today, We will update you about Sweet Tooth Season 1 release date the cast, storyline, of a sweet tooth.

Subsequently, Netflix has confirmed the release of sweet tooth globally. Further, It is an original fantasy drama whose plot revolves around Gus which is a hybrid, i.e., Half deer half-human.

Netflix has confirmed that season 1 of Sweet Tooth will be launched on June 4, 2021, and will be globally telecast. Moreover, The story is written by Jeff Lemire. Further, It is produced by Robert Downey Jr and his wife together with Dc entertainment and Warner Bros. Initially, it was set to be streaming through Hulu but after 2 years it was transferred to Netflix.

The Centre figure of the series is Gus which is a young hybrid (half deer and half-human). A devastating situation is created in the world by the virus “The Great Crumble”. However, The virus led to the creation of hybrid humans. It remains a mystery that Is hybrids are the consequence or the result of Virus.

Humans are afraid of these mixed varieties and they start hunting them. Sensing the fear, the hybrid kept themselves secured in a forest. Further, A young mixed hybrid Gus comes out of this forest and meets Tommy Jeopardy. Later, Together they went on a journey to know the secrets of hybrids, and this venture is filled with danger. What is the Number of Episodes in the Sweet Tooth Season 1?

The total count of the episodes is 8. The runtime of the episodes is not known but expected to be between 40 to 55 minutes. Moreover, It is still suspense as the series will not be completely the reflection of the DC comic. Anyways, It will have its own thrilling storyline.

The photography of this entire series has been shot in New Zealand. Likewise, It is interesting to note that even during an ongoing pandemic, the shoot was given a green signal but it was delayed. The shoot of  Season 1of Sweet Tooth was started in October 2020 and end in mid-December.

Furthermore, Stepping on the footprints of DC Comics fans are excepting a thriller drama full of emotions and action. It is assumed to acquire a wide audience.

Read More: Bling Empire Season 2: Here’s Everything We Know About The Next Season