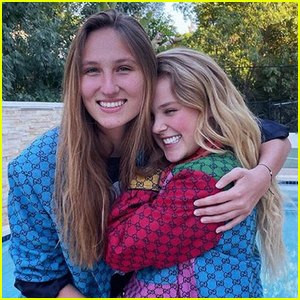 JoJo Siwa recently came out and proud to be a part of the LGBTQ+ community. Post this announcement, her life is happy and she is living the best of her life. And, here is all that you need to know about JoJo Siwa dating Kylie Prew.

According to the sources, the couple has been dating since January. Moreover, JoJo shared a picture of Kylie Prew and herself. And, the caption that she shared alongside was very cute.

“After being my best friend for over a year, January 8th, 2021 I got to start calling this exceptional human my Girlfriend… and since then I’ve been the happiest I have ever been! She seriously is the most loving, supportive, happiest, protective, and just the most beautiful perfect person in the world. And I get to call her mine! Happy one month to my girl! I love you more and more every day”

When Did JoJo Siwa And Kylie Start Dating?

Jojo Siwa had a tough time lately. Moreover, there were more talks about her after her coming out. Also, she came out on Instagram and let the world know that she was a part of the LGBTQ+ community. Moreover, she was open about her relationship with Kylie Prew also. She recalls that she met Kylie on a cruise boat initially. And, she also recalls that Kylie asked about her. And, when JoJo said all about her, Kylie responded with a reply that gave JoJo a smile. She said that that information can be known from Google. But Kylie wanted to know more about her. And, JoJo felt that no one spoke like that to her. And, that brought a smile to her face.

Recently, the couple celebrated their five-month anniversary with cute matching jackets. Also, the couple took to Instagram to tell us about their 5 months of togetherness.

Long-distance relationships are harder for everyone. And, JoJo Siwa and Kylie Prew are also going through one. In her Instagram story, JoJo posted a tearful picture saying I. Don’t. Like. To. Say. Goodbye. And, after updating this story online, she also posted a video that states that nothing happened, but she had to bid Kylie goodbye. Also, she went on to say that it hard to move this way with long-distance relationships.

Moreover, she kept on saying that she can’t stay away from Kylie and that long-distance is making things harder. But, for the betterment of both of them, it has to go that way. She also adds that she can stop crying for hours after Kylie leaves and this has become a routine for her. She posted a video on Instagram telling all of these a while after the story that she updated.

Also, read Who Is Jojo Siwa Dating? Her Coming Out Story As A Lesbian

JoJo also spoke about her coming out on Instagram. She was a prominent public figure and she found it scary to come out. On Tonight’s Show With Jimmy Fallon, she explained how hard it was for her to come out. Also, being a public figure already, it was very scary she said. But, she also stated that if people had to hate her for who she actually is, and if everything that she built so far would shatter just because of who she is, then she doesn’t want that. Also, she added that all that she needs is to love herself. Moreover, in another interview, she spoke Kylie Prew. Furthermore, she stated that her girlfriend is the most amazing, wonderful, perfect, and beautiful girlfriend in the world.

The love saga of JoJo Siwa and Kylie Prew is super romantic and they are dating to date. The couple shares a beautiful love story. Moreover, it is more good to see that JoJo Siwa is feeling good after coming out on Instagram. This is a brief on JoJo Siwa Dating timeline.