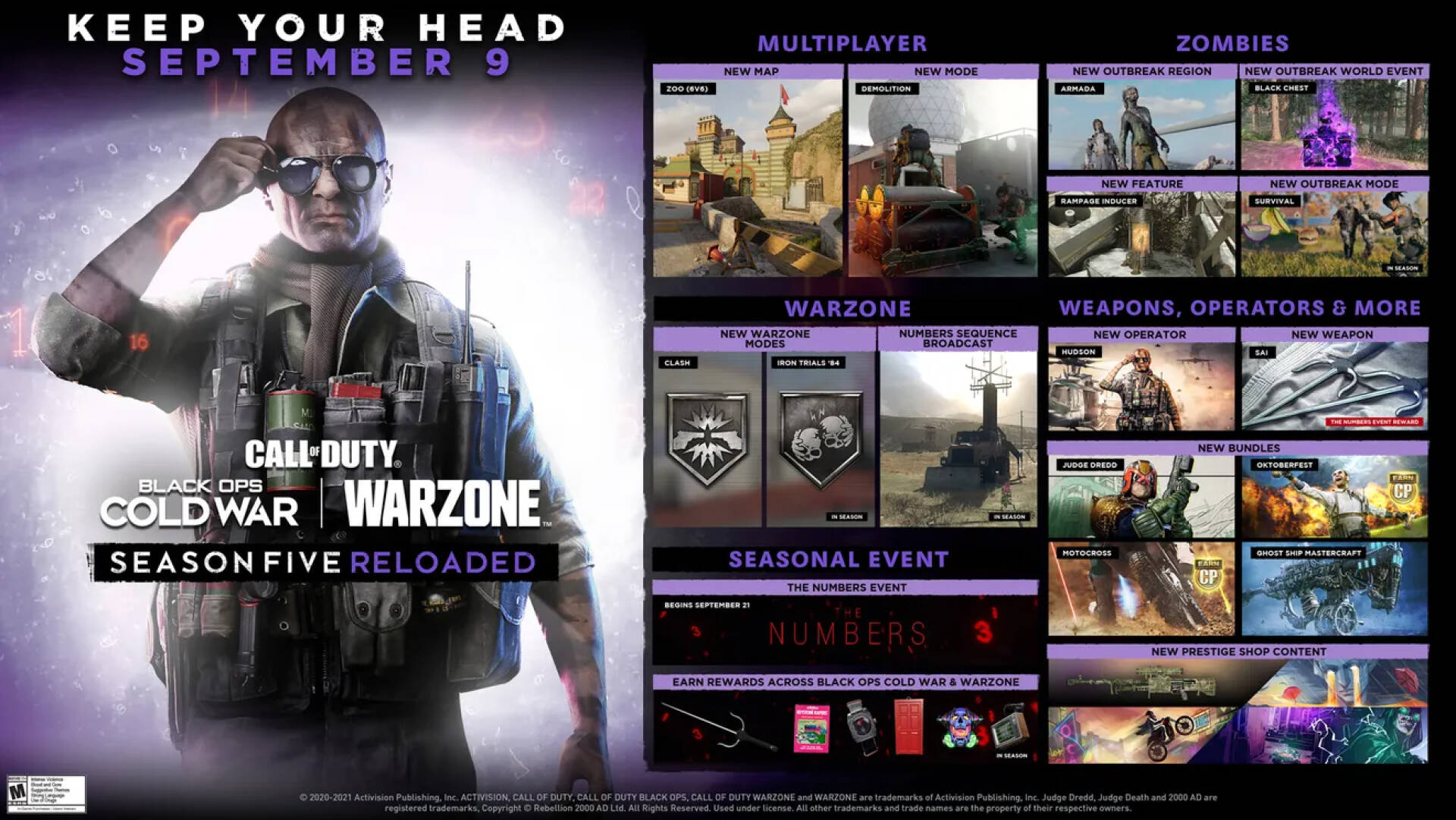 The Season 5  of the  Call of Duty Warzone came only a few weeks, but it seems the battle royale is preparing to receive a “new” season version of the Activision shooter.

Season 5 Reloaded is also related to Call of Duty Black Ops Cold War will put on the plate a lot of brand new content, from weapons and operators, passing the zombie mode.

The event is almost concomitant with the tightening decided by Activision about the “war” to the cheaters, a cleanup designed to make the multiplayer game even more enjoyable by the community of players.

Only yesterday, moreover, did the first hint of a new hero taken from the comics emerge who would soon make his triumphal entry into Warzone.

The next season of Call of Duty kicks off on Tuesday 7 September. Season 5 “Reloaded” ( “Furiosa” in Italian) brings all the new content for Call of Duty multiplayer, including an event called The Numbers – which harks back to a classic Black Ops narrative theme – and an appearance of the super cop of the comics Judge Dredd .

Activision, Treyarch and Raven Software have also confirmed an updated version of the Zoo map , originally released as part of the original Black Ops Escalation DLC pack , and the return of Demolition mode in the main multiplayer of Black Ops Cold War .

Warzone players will have another chance for 50v50 team deathmatch with Clash . In Verdansk, the mode takes select areas from this huge map and pits two teams of 50 players against each other in an unlimited respawn fight for 500 points .

Whether it’s Downtown, the Boneyard, or even the popular Factory area, your mission in these areas of Clash remains the same: earn points by eliminating enemies and completing contracts to earn in-match rewards and collect upgrades from defeated enemies. that give you game-changing abilities.

Plus, the bullets can literally look like beer (yes, you got it right) as Oktoberfest is coming to Call of Duty . Considering that the German fair has been canceled, the FPS has decided to pay homage to her with the Lederhosen operator skin for Beck and two weapon designs with a new Beer Tracer fire effect .

Also included will be another new mode for Call of Duty Warzone : Iron Trials ’84 , dubbed “the toughest Battle Royale mode ever to come to Verdansk”. Zombies players will eventually have a new Outbreak (Armada) region and a new world event.

All this in view of the release of the next chapter of the FPS saga set in the Second World War, namely Call of Duty Vanguard .

But not only that: have you also read that  Call of Duty Black Ops Cold War  has said yes to an additional game mode for its new season, extremely similar to the game Among Us?