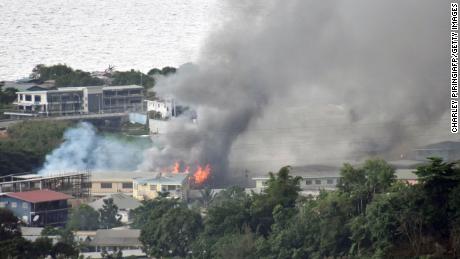 As per reports, there has been an undergoing protests at the Prime Minister’s residence. The civilians tried to barge into the Prime Minister’s home through force. They even tried to set alight a building near the residence. The disturbing incidents took place on Friday. As these protests continued up until the third day, the police intervened. They threw tear gas at the protestants due to their unruly behavior. However, they were not taken under control therefore, the police have also announced curfew Honiara and the reports suggest that this might continue indefinitely. The police have also used their weapons against the protestors as the matters got out of hand further. They even arrested few people as a measure for the others to curb down the protests. Many troops who have allegiance with the present government also sent the troops to the Solomon Islands so as to handle the demonstrators. In this article, we have stated the reasons behind the protests that are currently taking place in Solomon Islands.

There are several immigrants from the Malaita Island residing in the place. They have felt discontent over almost a decade due to the lack of support from the government. They have still remained a less developed nation. Despite several pleas, the government has again and again denied their requests. Back in 2019, the government had decided to form allegiance with China over Taiwan. Though Taiwan is an independent land, China has always tried to claim it as its own. It had also removed the membership of the country from the WHO member nations. Therefore, the Ministry of Taiwan has also accused China for corrupting the government in order to proceed with it’s unfair practices.

Due to this reason, the people were dissatisfied and went ahead with the protests. They have criticized the decision of the government. United States is providing the island with foreign aid but the experts have clarified that the developed nations usually interfere in the matters of the small nations and this often leads to disruption.

Many buildings near the Prime Minister’s residence has been destroyed and set on fire. The Prime Minister strengthened the security of the place and also asked for more help from the Australian government.

The protestors were unable to survive on any food or water supplies as the local shops denied opening their shops. While the protestors continue to demand the resignation of the current Prime Minister.

For more details about political and global news, you can visit our website regularly.