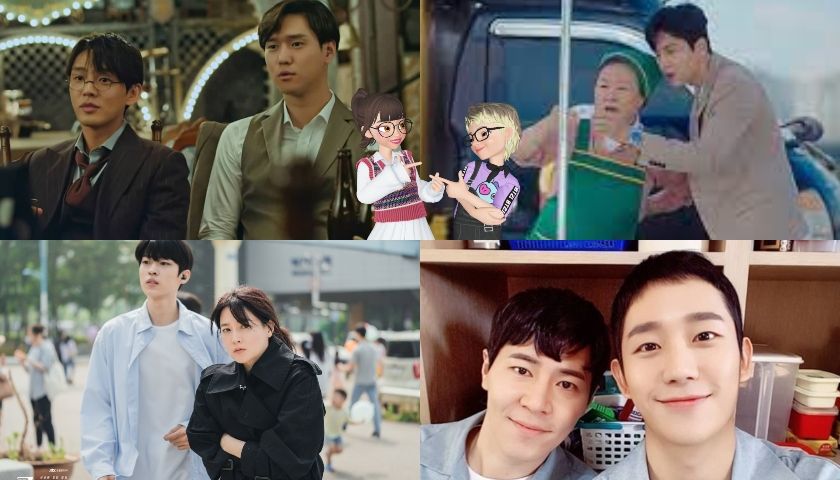 Here is a list of dramas that develop the sense of friendship in stories that make us wish we had friends like the ones in the drama we are following, because friendship is one of those concepts that people relate to very differently depending on his place in life, past experiences and what I guess the personality would be. The concept of friendship may sound simple and something we can all relate to, but once I started reflecting on what I think it is, I realized that, once again, it’s complicated to encompass everything from loneliness to the limits and the different needs and abilities that people need to get or be a friend. Some people have many friends, while others have few or none. Some might want to have a lot of friends, while others might choose to be with few or rather alone (the whole introvert vs. extrovert thing). Some people have lived in the same place all their lives and still have the same friends they grew up with, while others (like me) moved frequently, having to learn how to make new ones and let go of friends over and over again. . again. But sure, no matter how you relate to the concept of friendship, Dramaland probably has representations of the kinds of friendships you wish you had, the ones you wish you hadn’t experienced, and the ones you just might want to avoid. So, let’s see a list of dramas where friendship is the main focus in the story, this usually takes place in dramas about life, rather than romance, although there are several stories from friends to lovers, in this note it is not the subject…

Be Melodramatic, is one of my favorite dramas in terms of the representation of the friendship that I would most like to live. Their story serves as the perfect bridge that blurs the line between family and friendship. Follow three friends who live together and are accompanied by a guy. The reason why they end up living together is a sign of the great friendship that unites them, but that reason is a wound destined to heal with the passage of time, the company, the support and above all life itself that never leaves you in a single site no matter how hard you try to take it as your safe place. Each protagonist is going through a stage of their lives where the inevitable changes come and each one is there for the other. To listen, encourage and hug. Thanks to dramas like this, I think the line between “family”, “found family”, and “friends” is as blurred and complicated as the separate concepts themselves.

«age of youth” Y “Hospital Playlist» are two other dramas where friendship and the passage of time strengthening it and telling us how friendship needs everyone involved to grow, like a plant that requires constant care, are perfect examples of how emotional dramas can be where friendship is the main theme. In “age of youth«, we have a group of college girls who are dealing with college life, love and life. They all have their problems and at first they are reluctant to share them, but with the passage of time and the problems they face they become closer and learn to trust each other. The first season gave me more of the feeling of friendship that I was looking for than the second where there was a change of actresses. In “Hospital Playlist»we have almost the same friendship process, but the characters are more adult and face slightly different problems and they are so close that even their families are too, something we didn’t see in «age of youth«. In any of these stories you will find a friendship worth reproducing.

Hospital Playlist «dear my friends» is the epitome of friendship in Korean dramas, the story shows a group of friends already in the third stage of life. They have all had their own struggles and although with some issues between them, they have all remained true to what they have built since their younger days. The element of school groups and the loyalty to them so traditional in dramaland stories is added. It is a story full of humanity and many emotional scenes that attest that friendship can be so strong that it can easily go through the years that come upon it!!

In Weightlifting Fairy Kim Bok Joo . shows an adorable trio of girls who defend, cover up and even get jealous when they discover that one of them has a secret towards the other two, making them feel left out and sad that the trust inherent in their strong friendship has not been respected . Honestly, this friendship is probably one of the healthiest and most empowering friendships in dramaland.

In the middle, let’s talk about “man’s best friends”: dogs, which are part of the cast in various dramas and move the emotions of the characters, usually in funny ways. Let’s talk about two pets: Mimi from Do Do Sol Sol La La Sol and Woo Bin from While you were sleeping , who are more or less the only family their owners have. Until Mimi’s mother, Ra Ra ( Go Ah Ra ), becomes part of the village and the Han official ( Jung Hae In ) meets Jung Jae Chan ( Lee Jong Suk).), dogs are the closest living beings to them.

Then we have Barassi from Let’s Eat Season 1 who has one of the most beautiful clothing selections in Dreamland, is a true enthusiast and becomes like family not only to his owner but also to all the tenants who live on the same floor as her, plus his name has a somewhat different origin. I miss that you only understand watching the drama 😀

In my opinion, friendship should not have an age limit, but let’s remember that the strict social rules in Korea are serious when it comes to people with marked differences in age or work or social status. But, as long as there is a common interest, it is most likely that a bond can be formed over the greatest age differences, as is the case with Navillera, where a bond is created on the common love for ballet. This drama portrays the beautiful bond between young dancer Lee Chae Rok ( Song Kang) Y the Lord Shim Deok Chul (Park In Hwan) ) 70 years old, who is desperate to learn to dance. These two find common interest and mutual support, overcoming obstacles and showing us viewers the value of friendship.

But before that, who can forget Lee Kang Doos?( Lee Junho ) and his friendship with Mrs. Jung Sook Hee ( Na Moon Hee) in Just Between Lovers ? To be clear, they weren’t lovers, but you could definitely feel the love between them, caring about each other’s health, their life choices, and helping each other in their relationships with each other. Mrs Na Mon Hee did a similar character in the must-see movie”I Can Speak» with Lee Jehoonalthough there it was more like “enemies to great friends.”

In start-up we witness a beautiful friendship between a school boy, Han Ji Pyung ( Kim Seonho ), and someone else’s grandmother ( Kim Hae Sook ) after Ji Pyung finds himself without a place to live. While he needs a place to stay, she needs a pen pal for her very lonely granddaughter, serving as the starting point for a friendship that is certainly hard to forget. The same actor has a great friendship with another lovely grandmother (again, not his, at least not genetically) in Hometown Cha Cha Cha, interpreted by Kim Yeon Ok . I don’t know if there is a connection between the two, but the scenes between the two were probably some of the best parts of the show.

And well with less age difference, we have a saving relationship between both characters in the jTBC and Netflix drama.”Inspector Koo“, where Koo Kyung Yi and Santa, go from strangers to coworkers, caretaker, and finally friends who care about each other and forgive each other for the faults one or the other makes in their relationship. The relationship includes a distance and a reconciliation where the important thing is not to lose each other, leaving pride behind. Indispensable element of a friendship that we all desire.

As I said above, the status differences in Korea make friendships difficult, but dramaland knows how to jump this hurdle. A recent drama that shows this difference very openly is At a Distance, Spring Is Green, where Nam Soo Hyun ( Bae In-hyuk ) tries his best to show Yeo Joon ( park ji hoon ) who, although they go to the same university, live very different lives and should not be friends. However, Joon is extremely persistent in wanting to befriend Soo Hyun, calling this friendship a true Bromance at the end of the drama.

Another very unequal friendship is that of Kim Myung Hee ( Go Min Yes ) and Lee Soo Ryun ( Geum Sae Rok ) in Youth of May which gets Myoung Hee in trouble and forces her to sacrifice herself for the sake of her rich friend who, to save her wishes, does not hesitate to force the one she calls “Friend” to clean up her messes.

The idea that people of the same gender can be platonic friends is often taken for granted or can easily become a joke or joke. Prison Playbook has several surprising displays of friendship between men, but the development of the friendship, perhaps even the bromance between the very gay character Looney ( Lee Kyu-hyung ) and the initially homophobic Captain Yoo ( Jung Hae In), is probably one of the most developed friendships shown in dramaland, being both supportive and prejudice-breaker. and showing that people can change.

Sometimes one life is not enough…

Have you already found a friend in this life? Maybe just maybe, your friend is stuck in a typewriter somewhere… Or maybe a pen or a watch? Chicago Typewriter it shows that some friendships are so strong that they will haunt you in your next life. Not the “I’m going to kill you” type, but the “I was so important to you that even death didn’t separate us, I promise I’ll come back and help you through life’s hardships.” Ok, even if one of the friends has killed one of the three as a response for being responsible for the death of the third friend. But hey, that was due to circumstances and again in a past life, so now it’s nice for them to get together and tell their story together. a beautiful one, More or less the same cliché is repeated in «Hotel del Luna» and surely we will see the situation in some other drama…!!

Well, if you haven’t seen any, I hope you find reasons not to postpone it any longer and Happy Day of Love and Friendship!! (That’s what it’s called in Mexico) Credits Mydramalist