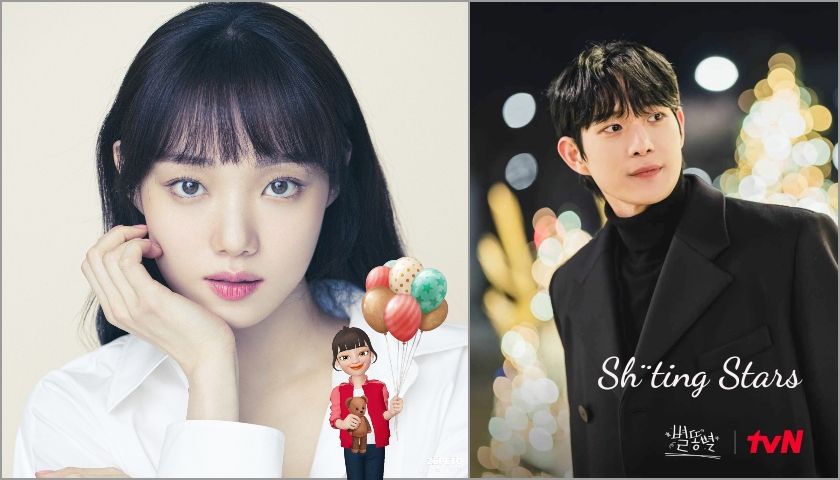 Lee Sung-kyung, from “Shooting Stars,” talks about her co-star Kim Young Dae, how she wants everyone to perceive her as an actress, and the secret behind her beauty. If you’re a fan of the cliché of “best friends turned enemies turned lovers» in romantic comedy dramas, then look no further than Sh**ting Stars ! The currently broadcast Kdrama starring Lee Sung-kyung Y Kim Young Dae as the main couple, Sh**ting Stars (under Studio Dragon) depicts the interesting love story between a big star and the PR head of the management agency he has signed with.

Lee Sung-kyung She plays the trustworthy PR chief Oh Han Byul, who is absolutely the best in the business because no one can handle crisis management as easily as she does. However, the character of Kim Young Dae, Gong Tae Sung, is like his worst enemy. Gong Tae Sung is a superstar in the entertainment industry, known to fans and the media for his polite and upright image. However, behind the door he is as temperamental as he seems! Besides acting in front of the cameras, Gong Tae Sung’s favorite thing to do is make Oh Han Byul’s life a misery!! The constant and downright hilarious back-and-forth between the complicated couple highlights their messy past, as we embark on a hilarious journey where “opposites attract.”

Lee Sung-kyung has made his mark as a beloved Hallyu star, admired around the world. She was already nominated for the Baeksang Arts Awards and is capable of developing as a singer, dancer, and model. In Sh**ting Stars.

On his work with Kim Young Dae, he said:

When I first saw Kim Young Dae, I was worried that he wouldn’t be able to fully perform the arguing scenes with Oh Han Byul because he was so shy and looked nervous like a puppy lost in the jungle. But once we started shooting, he did so well that he caught me off guard (haha). Kim Young Dae’s most charming quality would be that he is always able to brighten everyone’s mood by telling cute jokes during photo shoots. It was very fun and comfortable working with him.

As you are part of the entertainment industry, and you are also a big star, do you feel that Sh**ting Stars accurately describes the problems that actors face?

There are many similarities. However, the show exaggerates certain things to add dramatic effect. Many situations within the show are something one might experience in the entertainment industry, but there are additional dramatic elements regarding the theme of the case or the way the situations are resolved.

Can you tease what fans can expect in the upcoming episodes of Sh**ting Stars? And what do you think is the knot in Gong Tae Sung and Oh Han Byul’s complicated love story?

Not only will they be able to follow the love story of Gong Tae Sung and Oh Han Byul, but they will also be able to enjoy detailed stories about the entertainment industry, exciting and funny episodes, charming characters, pain and suffering that people outside the industry don’t know. could understand and meaningful messages worth contemplating. All the different aspects that make this show unique. I hope that the audience will keep their interest in these elements while watching the show.

Sh**ting Stars gives us behind-the-scenes access to the entertainment industry. Since you’ve been a part of the industry for quite some time, how do you want everyone to perceive you as an actor? Do you have any challenges ahead that you want to overcome with every project you take on?

Sometimes I think, ‘Maybe it’s time to show people a different side of me.’ Then I turn around and think, ‘What’s something I can do better? Maybe it would be better for me to focus on that instead.’ It has always been a ping pong back and forth between those two thoughts. However, at the end of the day, I would love for all the fans to enjoy my performance whichever way I decide to go.

Fans of Lee Sung Kyung will agree that you are not only a talented actress, but you are also exceptionally beautiful and look gorgeous in Sh**ting Stars. What is the secret of your beauty?

I eat healthy, and I always exercise and stretch no matter how busy I am. For my skin, I focus mainly on sun care.

You are a multi-talented star, who is amazing in acting, singing and dancing. What is your favorite area to delve into among the three of you and why?

I would like to excel in acting because I am an actress. I would say that I usually put more effort and attention into it. Well, all of us are definitely big fans of this multi-faceted beauty! Pinkvilla Credits