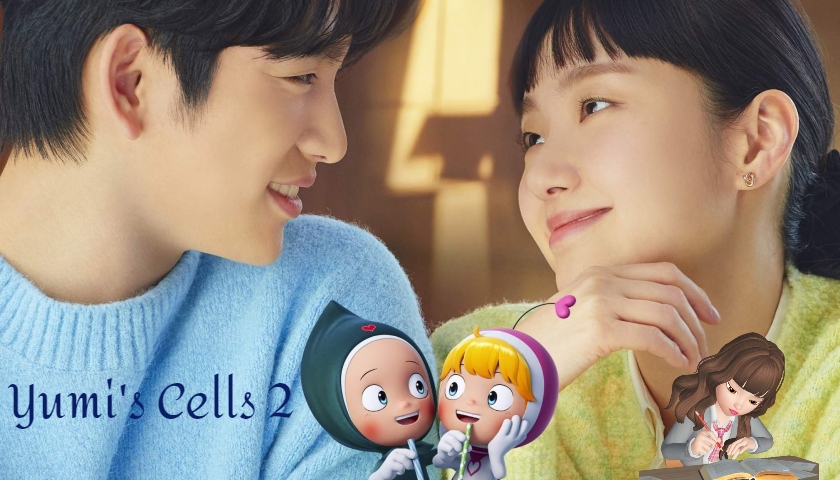 Based on the hit webtoon of the same name, «Yumi’s Cells» tells the story of an ordinary office worker named Yumi, from the point of view of the many brain cells in her head that control all her thoughts, feelings and actions. Kim Go Eun plays the main role of Yumi, an ordinary woman who struggles to express her feelings. The first season of the drama aired through TVING and tvN in September 2021 and received much love for being the first K-drama to combine live action with 3D animation. In this second season, jinyoung Got7’s will play Yoo Babi, Yumi’s new love interest. The teaser begins with Yumi’s charming co-worker Yoo Babi (jinyoung), asking, “Did you wait long?” In the next scene, Yumi accidentally falls down the stairs, but Yoo Babi is there to catch her and ask, “Are you okay?” Although Yumi pretends to be calm on the outside, her cells cheer and exclaim, “He’s so handsome.” Yumi’s cells pound the drums loudly to signal her throbbing feelings. Yoo Babi starts to make direct advances towards Yumi, as he tilts the umbrella closer to Yumi’s side. He asks, “Can we start now?” Confused, Yumi asks, “Start what?” Yoo Babi replies, “A date.” Yumi’s cells launch into the air as they exclaim, “Our heart is under attack!” Chaos ensues as a rock flies towards the gates of the kingdom, analogous to the way Yoo Babi flirts openly and honestly. The text reads, “More powerful heartbeats are to come,” while the sneak peek ends with Yoo Babi’s love cell making a lovely entrance. The new season will tell the story of Yumi’s love and dreams with Yoo Babi and will premiere on TVING on June 10I already want it to arrive!! There will be 14 episodes of comedy and romance directed by the PD Lee Sang Yeob («Yumi’s Cells 1, 2021; «My Holo Love«, 2020; «Family Wife«, 2019). The script is a collaboration between the writers Song Jae-jung («W Two Worlds«, «Memories of the Alhambra»«Yumi’s Cells 1«), Kim Yoon Joo («Nine:Nine Times Time Travel«, «Find Me in Your Memory«, «Yumi’s Cells 1“) Y Kim Kyung Ran («Yumi’s Cells 1«). Credits Soompi