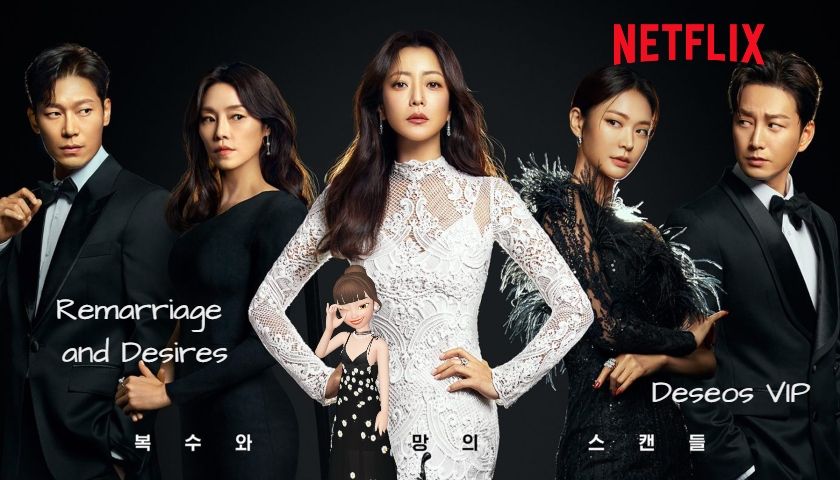 «Remarriage and Desires“, in Spanish “VIP Wishes«, the Netflix original drama premieres on July 15 and is the second project of Kim Hee-sun in the year. There will be 8 episodes of Drama genre. It seems to me that it is a melodrama or even a makjang-style story, similar to «Marriage ft Love and Divorce» which even had 3 seasons!! So if you see it please let me know if my hunch is right or wrong… Depending on whether synopsis: Through an exclusive matchmaking agency, women strive to marry a desirable bachelor and reach the highest echelon of society. The plot revolves around revenge and desires at a top-class matchmaking agency, where lust for money trumps true love. The trailer captures the desires of people who want to marry wealth and the shadow of revenge that lurks in it. When billionaire Lee Hyung Joo (played by Lee Hyun Wook ) registers with the matchmaking agency, Rex, its CEO Choi Yoo Seon ( Cha Ji Yeon ) has a great plan to find the best girlfriend for him. Seo Hye Seung ( Kim Hee-sun ) meets Jin Yoo Hee ( Jung Yoo-jin ) into Rex, who completely destroyed her life and quickly learns that he is looking for someone from the “Black” level to marry her. Since Hye Seung cannot forgive her for ruining her family’s life, she decides to marry someone of the same level to get back at her. Hye Seung then meets her first love Cha Seok Jin ( Park Hoon), another black level member, whose stepmother happens to be the CEO of the company.

Kim Hee-sun She will be playing Seo Hye Seung, an ordinary wife and mother who loses everything due to the sudden death of her husband. She tries to rebuild her life with her daughter, but she experiences another humiliating moment when she meets the person who changed her life at the Rex agency. She participates in a race of desire to take revenge on them and take away everything they want. «Remarriage and Desires» is a story written by Lee Geun-young who also wrote «I’m a Mother Too» of 2018 that I did not see. The direction is in charge of the PD Kim Jungmin («Bad Guys“, 2014; «Sweet Stranger and Me«, 2016; «Love Affairs in the Afternoon«, 2019 and «Secret Royal Inspector«, 2020) The cast is headed by Kim Hee Sun, Lee Hyun Wook, Jung Eugene, Park Hoon, Cha Ji YeonY Kim Yun Seo. Zapzee Credits