Barely a week after the release of its first trailer, Prime Video has unveiled the official trailer for ‘Paper Girls’, the long-awaited science fiction series based on the comics written by Brian K. Vaughan and illustrated by Cliff Chiang. The series recounts how in the early hours of the morning after Halloween night in 1988, four newspaper delivery girls -Erin (Riley Lai Nelet), Mac (Sofia Rosinsky), Tiffany (Camryn Jones) and KJ (Fina Strazza)- see each other. caught in the crossfire between warring time travelers, changing the course of their lives (and history) forever. Transported to the future, to 2019, these girls must find a way to return home to the past, a journey that will bring them face to face with adult versions of themselves. As they resign themselves to thinking that their future is very different from what they imagined when they were 12 years old, they are persecuted by a time-traveling military faction known as The Old Ones who have banned time travel in order to stay in power. . To survive, the girls will have to overcome their differences and learn to trust each other and themselves. The eight episodes of the first season of ‘Paper Girls’ They will premiere exclusively on Prime Video on July 29 in more than 240 countries and territories around the world. The series is produced by Amazon Studios and Legendary Television in association with Brad Pitt’s Plan B.

‘Paper Girls’ is created by Stephany Folsom (‘Toy Story 4’, ‘The Lord of the Rings: The Rings of Power’), also an executive producer with Christopher C. Rogers, Christopher Cantwell, Brian K. Vaughan, Cliff Chiang and Steven Prinz. Its first season is directed by Mairzee Almas, Georgi Banks-Davies, Destiny Ekaragha and Karen Gaviola. Below are two versions of the same trailer: The Spanish one, with Spanish subtitles and lasting one minute, and the North American one, without subtitles and a little over two minutes. 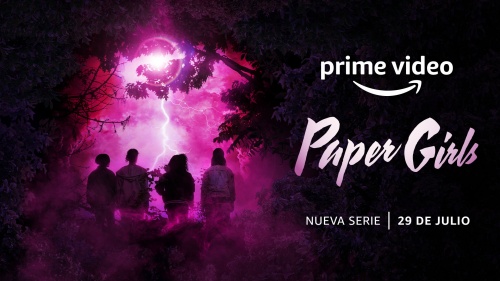