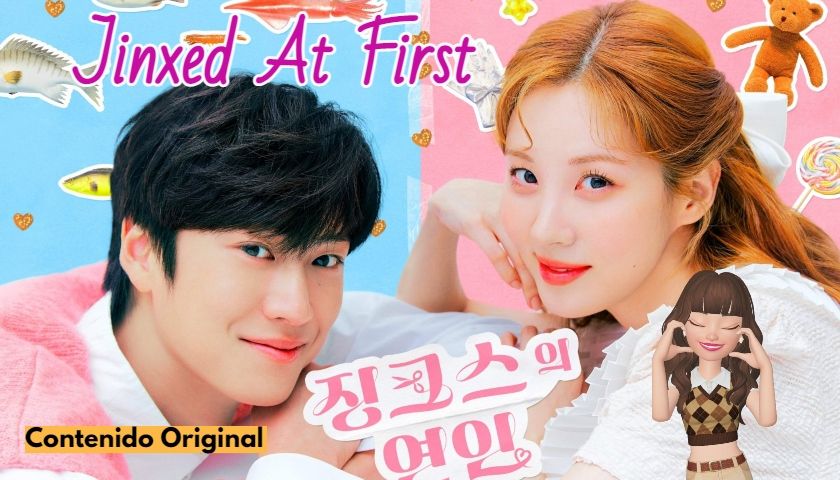 «The Jinx’s Lover” either “Jinxed at First» of KBS, has reached the end of its 16 episodes. The production starring Na In Woo Y Seohyun; of genres Mystery, comedy, romance and fantasy was losing the attention of the public, which initially supported it by raising its premiere ratings, but already in the second part of the drama the ratings were constantly falling, with numbers between 2% and 2.7% Already in the final chapters it achieved 2.4% in episode 15 and 3% in chapter 16.

If you like stories full of fantasy with very good good guys, even naive ones with a fairy tale ending and some bad guys who receive their punishment at the hands of the police, then this is a good option. I think it can even be seen with children, but not very young, because in the final episode there are some violent scenes. I don’t know if anyone around here saw the drama.”Mama Fairy and the Woodcutter» of 2018, well «Jinxed at First» has a very similar fantasy air, but with fantastic beings that are misunderstood in this material world and are exploited to satisfy the ambition of a few.

Synopsis: As a fishmonger in a traditional market, Gong Soo Gwang does his best to earn an honest living. Unfortunately, he has a reputation for being incredibly unlucky, and as a result, people try to avoid him at all costs. With no one willing to approach him, his business often suffers. No matter how hard Gong Soo Gwang tries, he can’t seem to find a way to escape his poor fate. However, his life was not always so bleak. Seven years ago, Gong Soo Gwang was normal and happy, but all that changed when he met Lee Seul Bi, a woman who, despite her brief encounter, changed her life forever. Since that day, every time he dreams of Seul Bi, something terrible happens to him. Although Gong Soo Gwang has no idea why this woman has had such a strange effect on her fortune, Seul Bi does. Having inherited a special ability from her mother, both women can see a person’s future through a single touch. Using this gift to her advantage, a wealthy family has held Seul Bi and her mother captive for years. When fate gives Seul Bi a rare opportunity to escape, she seizes it and runs straight for Gong Soo Gwang. Standing face-to-face with the woman who started her streak of bad luck all those years ago, Gong Soo Gwang is unsure if he should help Seul Bi or run away from her. With one desperate for freedom and the other desperate to change his destiny, will Gong Soo Gwang and Seul Bi become each other’s greatest ally or worst enemy? Seul Bi is like a curious girl in the body of a beautiful young woman, she trusts people and makes them happy in many ways, mainly by warning them about some inconvenience or helping them find unimaginable solutions to her problems. She earns the esteem of everyone who meets her, and she is appreciated by those who previously shunned Gong Soo Gwang and now wholeheartedly accept both of them. There is a noisy group of vendors at the local market where the couple runs a fresh fish stall, but also Seon Min Joon, the son of the rich family who kept Seul Bi and her mother hidden from her, finds her. Finally Gong Soo Gwang connects the dots that make him realize that Seul Bi and the biggest misfortune of her life are connected and so, after falling in love for the first time, Gong Soo Gwang rejects Seul Bi and sends her back with the Seon family. However, the problems do not end there, the other members of the Seon family covet the control of the family business, built thanks to the exploitation of the power of the witches from which Seul Bi descends, but that power also has a serious consequence for Those women. They also pay the consequences for abusing their power. By the end, Seul Bi and Gong Soo Gwang are constantly in danger, Seon Min Joon reconsiders his feelings towards Seul Bi upon discovering who she really is and begins to love the woman who was his fiancée and who turns out to be a girl. understanding and intelligent. Gong Soo Gwang makes a triumphant return to an office position that he had the necessary skills for, but had forgotten about due to his sadness and personal misfortune. The reunion with Seul Bi causes love to be reborn with more force, but there is still more pain waiting for them. The end is together and happy with baby and everything! The bad guys have gotten what they deserved for allowing themselves to be controlled by ambition. The friends hug the protagonists and it seems that life has restarted with many blessings for those who have acted correctly. There are some special effects scenes, but nothing really amazing, although entertaining. The story lacks originality or great gripping twists. It is pure and total entertainment with a lot of fantasy, especially in the second part of the drama. You can switch off your brain and let yourself go 😀 😀 😀 My rating is because this type of almost childish stories are not my thing, not because I consider it bad or unbearable, I leave those qualifications for other genres that I don’t even get close to!!

The cast complies, but it’s not even that there is a beautiful wardrobe, dazzling sets, it’s almost as if they had done this to pass the time. By telling them that I like the character of Na In Woo in “cleaning-up» and that there his role is shorter!! As to Ki Do Hoon, it seems to me that his work was wasted, but the boy still needs more acting skills to not look so cold, when his character is going through emotional situations. “Jinxed at First” is in the direction of the PD yoon sang ho («King Maker: The Change of Destiny«, 2020 and «River where the Moon Rises«, 2021). The script belongs to the writer Jang Yoon Mi who has written the scripts for the films «Luck Key», 2016; «Cheer Up Mr. Lee«, 2019 and took over the scripts for the next OCN drama «Island» in both seasons.