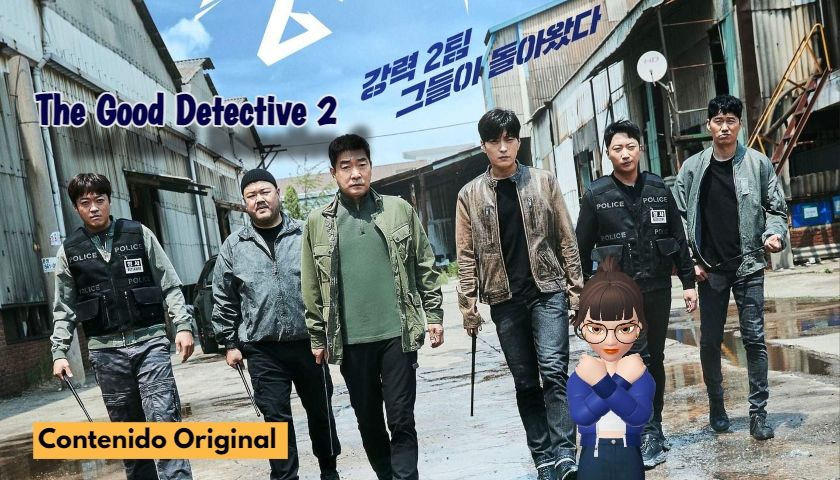 We are in the middle of the jTBC drama, «The Good Detective 2«I don’t know for what strange reason, our alternative pages are having a hard time bringing it, because in Korea it is broadcast on Friday and Saturday, but I find the episodes with subs in Spanish within the following week. The drama continues with hardly any promotions from the station, but the public has remained faithful to the production, giving it constant ratings between 3.720% of the first episode up to 6.995% of chapter 8. Until now it has not been reported if Netflix will also broadcast the second season, since the first one got more attention, after the platform made it available worldwide.

The somewhat fleeting comedy continues in this group of men, strong and determined as they face not only the bad guys and solve some crimes, our heroes also deal with cases that have apparently been solved, but there are loose ends in the deal, of course, there are corrupt cops and the help that our crime team would get is not yet here, it is just being drawn when the boys reopen a particular investigation that puts them in front of the rich and powerful heirs of the TJ group, who hide their crimes behind masks of successful businessmen, while manipulating the laws and who should investigate them. Basically, detective Kang Do Chan continues to support his team as a leader, although on paper he is not, I am amused to see how this skillful guy becomes furious when he discovers the tricks of the criminals, the corruption of his companions, that his hobaes are injured while they persecute criminals, that people are incriminated being innocent and that the girl he protects out of a feeling of guilt, does not feel so confident at his side and prefers to ask other people for help. Meanwhile, Oh Ji Hyuk has successfully rejoined the team after returning from Seoul. And I already understood that he spent time in the capital and had to return when an investigation he undertook was covered up by his corrupt boss who now works for the TJ group. Well, Oh Ji Hyuk has been related to Cheon Na Na, one of TJ’s heiresses, who tried to use him for her purposes, but things didn’t go the way she wanted, so she has put our boy on her list. of disposable people. This woman, as I said in the first impressions, is not to be trusted, behind her physical illness, which I still do not believe, she hides a strong resentment and I would say even a mental illness, given what she was capable of doing against her husband, at the end of episode 8. What seems weak to me in this character, or maybe it’s why I don’t believe in his illness, is that he spends all his time watching what the people around him do and say and nobody notices. She realizes, but yes, she gives press conferences and I never see her work!! The rest of the detectives and the station chief continue to work doing a bit of comedy, action and even one of them embarks on a one-sided love, because the girl he lays his eyes on has his eyes on someone else. Moon Bo Kyung, the girl in question, is the daughter of the station chief, but she has also joined TJ as part of the legal team, I think it is the most dangerous place to be given her family relationship and also given the cruel fate faced by its predecessor. I had not fully understood the relationship between Oh Ji Hyuk and Kim Min Ji, the owner of a beauty salon, but I already understood that TJ’s heir is the person who brings them together, in addition to the crime that Oh Ji Hyuk failed to investigate in the past. . It makes me angry that the girl, using the pretext that she has to protect her daughter, supports everything from her and remains silent without caring that the only person who helped her lost her life to protect her. So far the course of the story anticipates that Cheon Na Na is the evil one to beat in this season and there was also a special appearance by oh jung se who was the antagonist in season one. Anyway, I feel that the plot has been a little more violent than the first season, but it’s still entertaining and fun, so I’m still on board and supporting the small police station’s violent crime team 2. In the address is the PD Jo Nam Gook and the script is from the writer Choi Jin Wonboth of them were in charge in season one and before they worked together in the drama «untouchable» of 2017.