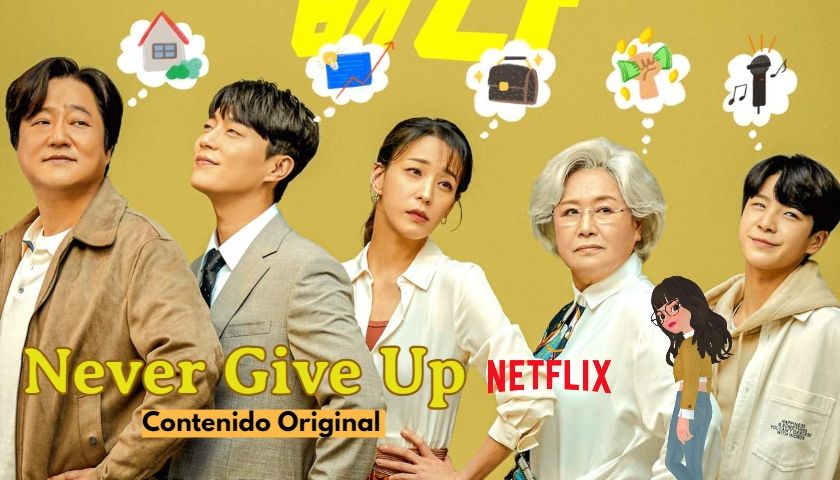 Netflix uploaded the drama to its Korean content «never give up“, in Spanish “Never give up«, but it came to us in past months under the name «Goo Pil Soo is Not There» from Olle TV, ENA and seezn. It is a production of 16 episodes of Comedy, life, drama and I would add Family. The protagonists are Mr. Kwak Do Wonwho returns to dramas after 9 years, when he starred in «good doctor» issued in 2013; Y Yoon Doo Joon (from Highlight) for whom it’s also his comeback after SM. accompany them Han Go Eun, Park Won Sook Y Jung Don Won. It is a drama that the whole family can watch.

I cannot deny that the first 2 chapters are very dramatic, because it is generally where we are presented with the characters facing sorrows and pains that they cannot solve on their own. But I read very good reviews saying that the comedy was adorable, and that encouraged me even more to see it, although I already had a powerful reason: to see Yoon Doo Joon!! Although I know that choosing a drama only for an actor or actress does not usually have good results, this time it was not. In my opinion the first part has more comedy and this happens when the main characters Goo Pil Soo a Kkondae style middle aged man(1) and a dreamy young entrepreneur named Jung Sok with a bitter outlook on life meet by chance and then end up living in the same house. This house is huge and elegant, it belongs to a mysterious and extremely rich woman, but the woman has ulterior motives to accept these two men who are strangers to her, living in her house.

Synopsis: Represents the bromance of Goo Pil Soo, a breadwinner in his 40s who dreams of his second heyday, and Jung Seok, a genius in his 20s who dreams of his own startup company. The drama will realistically portray relatable stories, including recent social and educational issues and the job and entrepreneurship wars. At the same time, it will create a harmony between different generations and show a warm comedy-drama that everyone can sympathize with and watch comfortably. Goo Pil Soo was a champion in martial arts and that is why he met her now wife and managed to marry her, now he has a fried chicken and beer place where he works together with her ex-trainer. But their abusive landlord leaves them homeless, and they are concerned that their teenage son’s future depends heavily on their continuing to live in Seoul. Goo Pil Soo’s chance encounter with the strange pawnbroker, Mrs. Cheon Ma Geum, gives him a little help that he can’t refuse, despite her conditions… Nam Se Mi is Goo Pil’s wife. Soo, works in a luxury department store, takes care of the housework and takes care of her son like any other Korean mother today, that is, she takes care of enrolling him in as many academies as she can pay so that the boy has better opportunities in the future. Goo Joon Pyo, is a teenager who has tired of following her mother’s instructions and decides to try another world, after getting involved with a girl who comes from abroad, she becomes rebellious, worries her parents and makes them fight with each other. . In general, both Goo Pil Soo and his wife are “good people” who do things according to social rules. Jung Seok grew up alone with his father as he lost his mother when he was very young. Now his father is in prison again due to the fraud that a supposed friend set him up. Jung Seok created an app with two “supposed” friends with which he intends to bring people closer together because in Seoul it is very common for neighbors not even to know each other. But his father’s situation is used by an ambitious woman and the guys she associated with show that they don’t know how to be friends. Now Jung Seok has no home, no money, no friends, and despite his father’s opposition, he asks for help from Mrs. Cheon Ma Geum and she accepts him in his house where Goo Pil Soo and his mother already live. family of him. Here, Mrs. Cheon Ma Geum begins to assert her position and demands that the two men find the original owners of some items that she still keeps as a pawnbroker. The search for the original owners of the “guarantees” brings the protagonists closer together, but they can’t help but fight over their opposing views, inevitably growing into each other and allowing a variety of characters to appear around the protagonists. who become “acquired family” thus justifying the need for the app “Neighbors 24” and agreeing with Jung Seok and his dreams of bringing people closer together. But the last guarantee to return coincides with a very painful event for one of the protagonists, however, he can raise his head because now he is surrounded by many people who take care of him and show him how valuable he is. The end has some drama, but the story is complete, although yes, it would even seem that Yoon Doo Joon is opposed to developing a romance with all of the law on screen! Here again, that part of the plot remains insinuation, although the boys have a lot of chemistry and together they look very cute. The comedy that was present in the first part of the drama, is lost a lot in the second, but I still enjoyed all the episodes, only that I owed one of the characters, that girl did not deserve a promotion when she resorts to lies and blackmail to achieve his ambition and, I think the story of Goo Pil Soo’s son took longer than necessary along with Anna’s, but anyway, they had a good ending.

(1) Kkondae refers to middle-aged and older people, who are described as intolerant and disrespectful, because they have a point of view on life and intend to impose it on young people without listening to any other voice. For them, you have to do things according to the rules in order to be successful, even if the world today is very different from the one in which they grew up. Remember that in Korea the elders are listened to, look down and remain silent, even if you do not agree with them and realize that what they say is a lie. Oh!! My liver!!

«Goo Pil Soo is not There»either “never give up«, has in the address to the PD Choi Do Hoon («Possessed«, 2019 and «Eccentric Chef Moon«, 2020); the script is collaboration between the writers Son Geun Jooauthor of «Backstreet Rookie» from 2020 and Lee Hae Ri, who has only done one other script for a drama called «under the gun«. Aaaah!! I am not leaving without mentioning that the little Jung Dong Won who plays the son of Goo Pil Soo, made his debut as a singer of «trot» a very popular genre among older people in Korea, this is his first drama, but he has participated in 2 movies and many more TV shows. Meanwhile, to Jung Da Eun who plays Oh Seul Gi, and who is a singer and actress, I remember her more from her role in «Mystic Pop-Up Bar» furthermore, we just saw her in «Cafe Minamdang«, but seeing how young she is, it is clear to me why she felt that the role in that drama was not for her !!