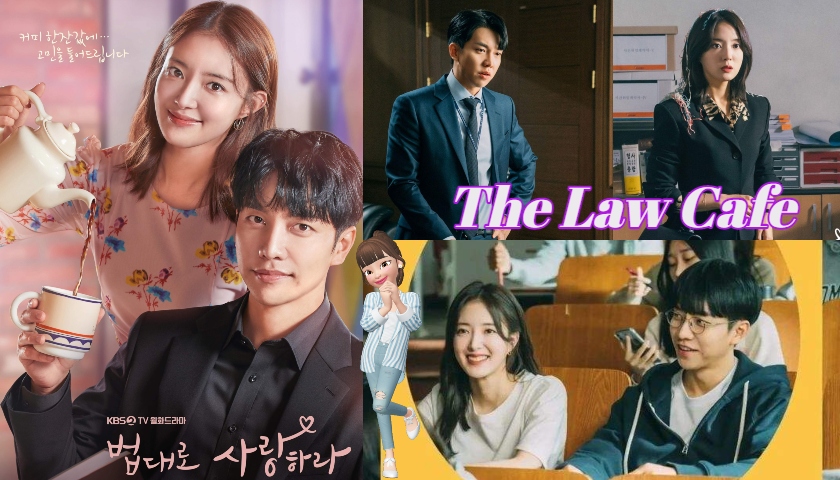 «Love Against the Law«, in Spanish “Love according to the law” (also «Love According to the Law” either “The Law Cafe«), is a drama that mixes romance and law, based on the popular web novel of the same name. The story takes place in a café that is both a law firm and a café called the Law Café. The drama tells the story of a former prosecutor turned owner and a lawyer who has a 4D personality and also runs the cafe. The premiere had been announced for this August, but now they tell us that will arrive on September 5. There will be 16 episodes of Legal, comedy and romance genres.

Lee Seunggi Y Lee Se Young will star in this drama as Kim Jung Ho and Kim Yu Ri, this is their second job together since “A Korean Odyssey” from tvN. The hilarious new teaser uses an interview format to get in-depth details on Kim Jung Ho and Kim Yu Ri’s relationship. After first meeting in high school, continuing their friendship through college, and then meeting as adults, both characters share their personal thoughts on their one-sided love of 17 years. The clip begins in her high school days with Kim Yu Ri excitedly running towards Kim Jung Ho. In her interview, Kim Jung Ho earnestly states, “It’s been so long that I don’t know when it started.” Kim Yu Ri adds, “There is no way of knowing when it all started.” But right after, Kim Yu Ri has her arms crossed as she scoffs and asks, “Did I like it?” . her before bursting out laughing. Similarly, Kim Jung Ho looks at Kim Yu Ri in disbelief and says with a big laugh, “Me?” In contrast to their cute and adorable school days, Kim Yu Ri and Kim Jung Ho are completely different people when they meet again as tenant and landlord. Given how familiar they are with each other, the two avoid all awkwardness and just get off to a rocky start. Kim Jung Ho angrily yells, “Get out right now!” Kim Yu Ri replies with equal annoyance, “Enough is enough! Enough!” Her battle takes on an added layer of tension when Kim Yu Ri sends Kim Jung Ho an official document for her lease. She explains, “If you really have to kick me out, then I’ll make it complicated. I’m going to be a nuisance. Kim Yu Ri immediately puts her plan into action when she finds her way to Kim Jung Ho’s house while she is drunk, causing him to comment, “She gets even more selfish as time goes on!” . However, the two reminisce about their past when they meet again on a spring day at a familiar spot under a cherry tree in bloom. When asked what kind of relationship she has with Kim Jung Ho, Kim Yu Ri sweetly shared, “When we are together, my life feels alive, and no matter what I do, I feel safe.”