In recent months, after recording ‘En el nombre de Rocío’, Rocío Carrasco has been frenetic. Very discreet, she has been focused on the renewal of the tribute show about her mother, Rocío Jurado

Honoring and doing justice to the figure of her mother, Rocío Jurado, has become Rocío Carrasco’s great undertaking. After the intense shooting of ‘In the name of Rocío’ this spring, its premiere on Mitele Plus became the best letter of introduction to the most pursued dream, and finally fulfilled, of the daughter of the greatest: the opening of the Museum Rocío Jurado in Chipiona. A very pleasant and successful memory, but that has already been far away. Nevertheless, Rocío Carrasco has not stopped in all this time. She has been able to enjoy few vacations and now we know the reasons.
The poster for ‘Rocío Jurado. El Musical’, renewed show promoted by Rocío Carrasco Teatral Initiatives
Together with Fidel Albiac, she has been concentrating and focusing all her efforts on renewing the musical that honors and reviews her mother’s life. For this important task they have counted on the complicity of their great friend, Anabel Dueñas. As the LOOK portal points out, the three start September giving this show a new twist. Change of name, producer, team and image. A push that coincides with the announcement of the premiere on Telecinco of ‘In the name of Rocío’ and that this Friday ‘Deluxe’ already offers its second episode. 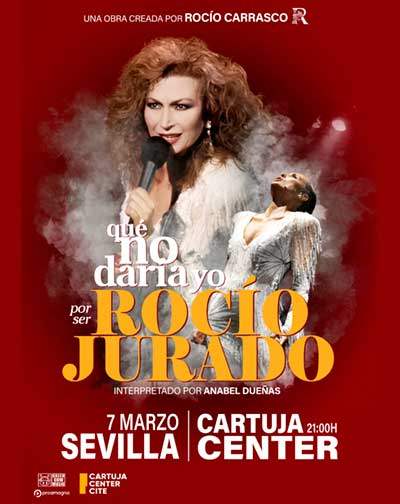 Poster for ‘What I wouldn’t give to be Rocío Jurado’ Green Cow Music ‘What I wouldn’t give to be Rocío Jurado’ changes its name after passing from the hands of Green Cow Music to Initiatives Theatrical SL Although it follows the same idea and the plot is the same, it is now promoted as ‘Rocío Jurado. El Musical’, which continues to have Anabel Dueñas as the protagonist. The show begins this new stage this Saturday, September 4 at the Teatro Zorrilla in Valladolid, where they are about to hang the ‘SOLD OUT’ sign. The new posters of ‘Rocío Jurado. El Musical’: a black and white image of Rocío Jurado looking defiantly ahead and, in one of the margins, Anabel Dueñas, in one of the most intense and exciting moments of the show.