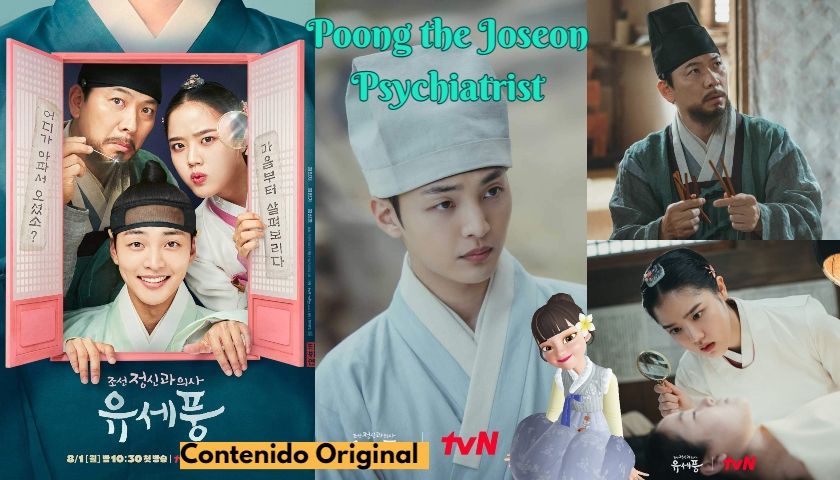 Wait a bit!! They gave me a drama and told me it was a 12-episode story, however we got to the end and surprise, surprise!! At the end of episode 12, which had a completely open closure, I find a legend that indicates that the second part will arrive in 2023!! But what is this?? So let’s talk about what we’ve seen and hopefully the producer will give us more details soon. The drama maintained good ratings overall, for a Monday-Tuesday drama, its lowest rating was 3.864% from chapter 1 and from there it went up to 5.3%. His final numbers were 4.323% and 5.1%. They are much better numbers than the drama that preceded it.”Link Eat Love and Kill».

«Poong the Joseon Psychiatrist«, is starring Kim Min Jae, Kim Hyang Gi and Kim Sang Kyung, the genres are period, mystery, drama, medicine. His story is based on the novel of the same name that won the award for excellence in the 2016 Korean Short Story Contest.

The synergy between the actors developed very naturally on screen, the protagonists get involved with their patients, generally poor, beyond their physical ailments, especially after the arrival of the doctor Yoo Se Yeop in the village, since he was expelled from the palace after the tragic death of the king and the death of his father. The young and successful doctor has lost his drive and self-confidence. The first patient she attends is a young widow who did not even know her deceased husband, the unfortunate girl lives in anguish and is a victim of her mother-in-law’s abuse. Until Yoo Se Yeop steps in and makes him regain her spirit and strength as a skilled forensic expert. In return, the cheerful and confident Seo Eun Woo studies acupuncture and becomes Yoo Se Yeob’s hands to help heal patients. Both young people join the rural clinic of the doctor Kye Ji Han, a man who lives with a burden of conscience and hides in a village outside the capital to stay away from the intrigues of power, however in his village he has to put up with an ambitious and manipulative man named Kim Hyung Mook who will do anything to seize the land that his small clinic occupies. Kye Ji Han appears to be ambitious and cold, but in reality he charges fortunes from rich patients with his right hand, to distribute food and medicine to the poor with his left hand, in addition to feeding and caring for “his family”, made up of people. whom he has saved and who have become for him a grandmother, a sister and two sons. Yoo Se Yeob soon adopts the name Poong, because he gets involved in the reasons for the patients’ illnesses, which gets him into constant trouble and even puts his life at risk when an epidemic hits the village. But in each case he gets ahead, with the help not only of the members of his new family, but even of Seo Eun Woo who begins to develop admiration for him and little by little he becomes something more, despite the fact that a boy whom she knew in her childhood, reappears in the village now a prominent member of the government. But the romantic triangle does not materialize because Jo Shin Woo, the supervisor sent from the capital, soon discovers that his father’s orders are not worth obeying, since he is required to kill innocent people in order to hide the truth about him. the crimes of royal advisor Jo Tae Hak, his adoptive father. Every week they dealt with new cases and therefore the palace intrigues, they weighed very little here so I could follow the drama without problems, there is a bit of humor, of course, intrigues, moving scenes, you find a very beautiful created family, a little action and tears, but not many. so the drama i can say, it feels light and you can enjoy it without worrying about the classic clichés of historical dramas, that’s why i say it’s a period drama and not a historical one, let alone sageuk. But what took me off balance is the ending that I expected more accurate, as a novelty due to the social conditions of the young couple, but what I saw, is that Yoo Se Yeob, after revealing the cruel intrigue of the main royal advisor and unmask his ambitions, he is invited by the king to take the position of royal doctor, and although everything indicates that he accepts it, he suddenly reappears in the clinic of doctor Kye, which made me hope that what followed was the formalization of the romance… But, lovers are separated?? A new danger hangs over the Korean nation and Yoo Se Yeob must take care of the King’s health?? Will the couple confess their reciprocal feelings?? What will happen to the clinic and the family of Doctor Kye?? Well, we will have to wait until January 2023!! I’m happy, but also confused!! I already want to see the first kiss of Kim Hyanggi on screen as she just came of Korean age and now I’ll have to wait. “Poong, The Joseon Psychiatrist” is a script by the writer lee bomwho has only written a script for a special drama before and is directing by the PD Park Won Gook («Special Labor Inspector Mr. Jo«, 2019 and Ruler Master of the Mask«, 2017).

Synopsis: Yoo Se Yeob’s legendary skills as a doctor are well known in the royal palace. However, he was expelled from the royal court when his alleged participation in a conspiracy against the royal family came to light, not only does he have to leave the palace, he even loses his father and now only has his faithful assistant and his box of Acupuncture needles. Dejected, he wanders aimlessly until he is saved by Seo Eun Woo, then tangles with doctor Kye Ji Han, who seems cold and ambitious, but actually has a heart of gold. Yoo Se Yeob has to start working in the strange but beautiful Gyesu Village, under the orders of Kye Ji Han. Yoo Se Yeob shows her sadness and bitterness every moment, even she can’t do acupuncture anymore, she’s too scared, so Kye Ji Han decides to transform the young doctor into one who heals hearts. For his part, Seo Eun Woo comes from a noble family and has great observational skills and deep empathy. She was left a widow without having known her husband alive and now she is a reflection of the stories of the disconsolate, her evil mother-in-law imposes blame that does not correspond to her in order to save the pride of her “noble” family, pushing the poor young woman to making dangerous decisions over and over again. Fortunately for her, Yoo Se Yeob shows up whenever she loses all hope. It is expected that in the development of the story, the three characters manage to save each other and at the same time help others.