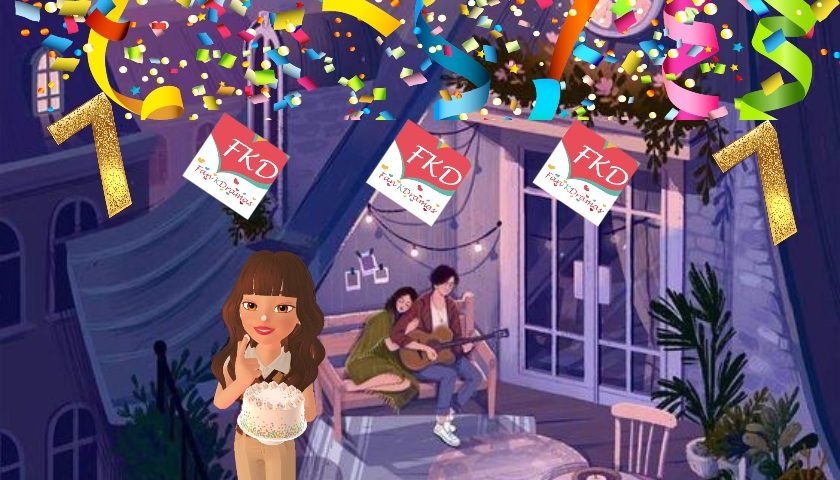 Due to the fact that I am alone taking charge of the blog and fortunately I have many notes to share, I almost forgot to make this note!! This blog celebrates his Seventh anniversary. Applause and hugs for all of us who are part of this space, whether as writers, collaborators or readers!! And since I’m Mexican, I offer basket tacos, beer for the older ones and horchata water for the younger ones!! 😀 😀 😀 For a more complete celebration, I chose today to share the experience about the arrival of Korean productions in my life. I am Mexican and since my country, in America, is the one with the largest Spanish-speaking population, since it was chosen by the Korean government back in 2000 (coyotes can still be heard howling 😀 ), to broadcast its television productions, today the effects of its dissemination strategy are palpable, not only dramas, but music, food and beauty have spread throughout Latin America and Europe, conquering us with their particularities and great differences with respect to the content that television stations in our respective countries offered us and continue to offer us.

“El Deforma” is a fake news site in Mexico, they generally spread them using memes. A stocky man, with an open shirt on his chest, sweaty, tanned and, hopefully, on a horse, owner of one or more successful haciendas, seems to be the best summary of the Mexican telenovela heartthrob. That man in love with a young girl who does not belong to him because of her social class, who seeks to win her over in the midst of scenes of slapping and feverish sex embodies, broadly speaking, the plot of the genre that, according to the late writer Carlos Monsivais, helped build the Mexican identity. However, in the novels that South Korea has been exporting to Mexico for decades and that were the engine of the creation of true armies of followers in this country, things seem radically different. How is it then possible that such a distant country has achieved the conquest of the mecca of soap operas? The Korean wave or Hallyu -as it has been popularized in different latitudes- has effectively managed to get South Korea into the hearts of millions of young people and families around the world with entertainment products: melodramas and catchy pop songs to the which he has christened with a k, k for K pop and for K dramas. By November 2021, Netflix had released more than 80 films and series of South Korean origin since it opened its service to that country in 2016 and had three productions of this origin as the most watched in the world. This conquest, unstoppable for more than a decade, has been possible thanks to careful State policy. At this point I stop to demand my South Korean nationality, listen, without realizing it I am a success story of a political and commercial strategy of the South Korean government!!

This is an announcement on Twitter from the television station «TV Mexiquense» announcing the premiere in 2018 of «LuckyRomance» originally broadcast in Korea in 2016 with the actors Hwang Jung Eum, Ryu Jun Yeol Y Lee Soo-hyuk. “All this phenomenon is part of a cultural policy of South Korea that begins in 1997, with the collapse of its economy, please watch the drama”Money Game» of 2020, which takes place around this time. Well, there the country saw the need to restructure itself and they realize that cultural industries feed on human capital and that is something that as a country, they have plenty of”, explains Nayelli López, a Mexican who, after living 11 years in Korea, he joined the University Program for Asian and African Studies at UNAM. The Koreans, looking for products that would allow them to open up to the world and make a true symbolic conquest, thus created a softer, much shorter and more stylized version of the traditional melodrama and tested it in China. The phenomenon drove the public crazy, the second economy where they took their productions was Japan, a country with which Korea did not have good relations due to the occupation it had experienced between 1910 and 1945. One of the most emblematic K dramas, «winter sonata«He made Japanese women fall in love with his new version of romance and changed the perception of them in this country. From his hand came the opening of new diplomatic relations, new markets and an avalanche of Japanese tourism to South Korea, which by 2004 had already grown by 35.5%, especially in places where the Kdrama had been recorded, this is a tourism option that has grown enormously and towns and cities take advantage of every place that can be used to record a drama, to increase tourism. Theme: “Because I’m Stupid”, performs: Kim HyunJoong, member of the group SS501. The theme was part of the OST for the drama «boys before Flowers» aired in Korea in 2009. Due to its audience volume, Mexico would be the first country to be conquered in the Spanish-language market. “The cultural consumption of Korean products in Mexico began in 2002, when the first telenovelas arrived on channel 34, an open channel in the State of Mexico, The Koreans offered free content, which was broadcast with a bit of padding. But just when that begins, they open the channel’s broadcast spectrum to Puebla, Hidalgo, Michoacán and since few people then had money to pay for cable television, many women and young girls who were at home get hooked on these new dramas. “In Mexico there was already a niche of young people who consumed products from East Asian popular culture, especially manga, anime and even J Pop, so there was a fertile field for this other identity group to emerge,” explains Dinorah Contreras , teacher in cultural studies and part of the Mexican Circle of Korean Studies (CEMEC). Since those days, the mostly young audience was tired of seeing the same narrative and listening to the same type of music on radio and TV, Korean products felt like a breath of fresh air. The first Korean content we had in Mexico was «All About Eve«, «Stairway to Heaven” Y “winter sonata«, series that were made shorter. “Unlike the Mexican drama, which takes everything to the limit of violence and sex, Korean narratives are very careful about emotions and create an experience of dosed emotion,” explains Gabriela Poox, doctor in Social Anthropology and co-founder of the CMEC. In the early 2000s, the Korean embassy in Mexico took a new step: promote the formation of fan clubs. “Do you like Korean series and do you have your favorite actor? Register your fan club at the embassy and on the actor’s birthday, we can give you funds to celebrate his birthday.” I mean, they gave you money to support your favorites!! Korean dramas present characters that are very different from those we see in the series that continue to be repeated on TV in my country, because they only change the name and the cast but they continue to tell the same story. Also, thanks to many KDramas, we have come to love Kpop groups and/or solos, and have gone beyond mainstream music to meet indie and other types of music that are not as exposed to the public. In addition, the cinema, which is usually more realistic, gives us a point of view of their society that is closer to the complexity in which they live. Over time and with a little curiosity on my part, I have realized that it is not healthy to stay in a position that loves everything that comes from Korea and ascribes perfection to it. XD!! They are human just like us, they have many failures and many successes, above all they are a society with its own history and problems that they will have to solve, exactly like us, even though we are separated by 14 hours apart (as in my country), or that is, they and I, will never live in the same time!! 😀 😀 😀 Just as Mexico is not only as it is painted in soap operas, neither is South Korea as it is in Kdramas!!