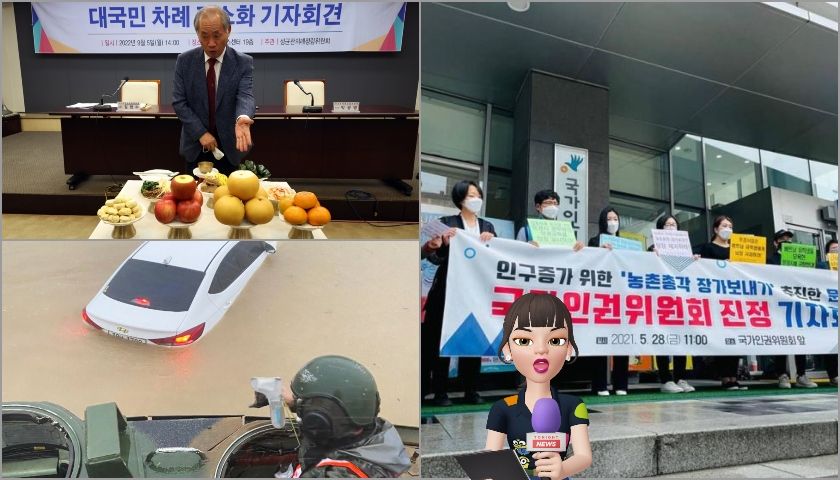 This beginning of the month has three events that affect Korean society, first, the effects of the third strongest typhoon that has reached the territory, then the controversial celebrations of Chuseok and finally a recommendation from the Human Rights Commission to a Province that encouraged a discriminatory policy against young immigrant women.

At the beginning of the month, Typhoon Hinnamnor arrived, one of the 3 most dangerous typhoons that have affected the country since records began. This time, and contrary to what happened in August, there were no major problems in Seoul, but in other cities closer to the coast of the Korean peninsula. Unfortunately there were deaths and many people lost their homes and property.

Typhoon Hinnamnor moved away from the Korean peninsula on Tuesday morning, September 6, after lashing the southern regions of the country, leaving three dead and six missing as of 10 p.m. Pohang reports in North Gyeongsang province. suffered the most damage in the country. The southeastern port city saw more than 400 millimeters of heavy rain overnight. The typhoon lashed the city with wind and rain, trapping residents inside their homes during critical hours. Compared to previous typhoons that have hit the country, Hinnamnor was the third most powerful. It is followed by Sarah from 1959, which registered 951.5 hectopascals (hPa) when it made landfall in the country, and Maemi from 2003 with 954 hPa. Hinnamnor registered 955.9 when he reached Geoje Island, South Gyeongsang Province. The lower the pressure, the greater the intensity of the typhoon. The city’s Nam district recorded more than 100 millimeters of precipitation per hour. It destroyed a dam on a local river in the district, flooding nearby agricultural fields. The country’s 1st Marine Division stationed in the city even dispatched two amphibious assault vehicles and three inflatable boats to flooded parts of the city for local emergency workers to use for search and rescue work. The country’s top four insurers, which provide non-Life insurance, including Samsung Fire & Marine Insurance and Hyundai Marine & Fire Insurance, have received reports of car damage totaling 40.64 billion won from of customers due to the typhoon. But since insurers took out reinsurance in the event of an emergency or natural disaster, the loss is unlikely to become a serious risk for them, according to data from the Financial Supervision Service.

On the other hand, with the new moon in September, the Chuseok celebration also arrived. This year the measures that prevented families from meeting were finally relaxed after two years in which Covid-19 prevented families from celebrating these dates with a large number of people. This means not only the movement of thousands of Koreans to their areas of origin, but also the economy is expected to benefit from the purchase of food and gifts. However, as in every recent celebration, the complaints of the women who are forced to take care of preparing food on their own for the ancestors of their husbands’ family, their in-laws and the many guests They express themselves in groups of social networks.

Traditional celebration table While single women say that even if they get married at a certain time, they would not celebrate these dates and if their in-laws insist, then they will buy food at a restaurant, but they will not wear themselves out and even get sick from pleasing others people (BRAVO girls!!). Other women, who have already married and are the youngest daughters-in-law in their husbands’ families, recount the hell they have had to endure during these dates, locked in the kitchen, first preparing food, then washing dishes and pots, while the men they only laugh in the room and accompany their talks with some liquor, the children run everywhere, the mothers-in-law criticize the taste of their food and their sisters-in-law are absent from home with various pretexts. HORROR MARRIAGE!! 😀 😀

Suggested “Simplified” Celebration Table In response to sadness among married women, a group dedicated to preserving the traditions of Confucian culture and rituals released a set of guidelines for a simplified Chuseok table. The Sungkyunkwan Commission for Ritual Correction announced new standards for the creation of ritual tables on Monday. The commission aims to improve complex and impractical traditions and spread the changes to the public. A survey of 1,000 people by the commission found that four out of 10 Koreans believe that the current ritual should “simplify” the process for its improvement, and almost half of the public said that five to ten types of food is the most appropriate amount. to prepare. “Remembering your ancestors does not lie in the variety of foods. We hope that Chuseok will become a holiday to reflect and think about your family and your roots, not a holiday to cook jeon,” (Jeon is a deep-fried food, which takes a long time to make), the commission said. Simplifications are expected to be discussed as a family in order to comply with traditions but at the same time involve the members of the group and not burden a single person with obligations. Well, they better or little by little, and even if the elders get angry, the women will take care of them more than the ancestors of their husbands’ families whom they didn’t even know!!

Finally, the National Human Rights Commission of Korea (NHRCK), made a recommendation to the city of Mungyeong, North Gyeongsang province, demanding that it review its policies aimed at population growth, since some of them clearly violate the human rights of migrant women. Among other points, the NHRCK pointed out that the city government’s approach to dealing with the declining rural population is problematic and discriminatory, since it views immigrant women simply as a means to increase its local population. In April last year, an official document sent by the Mungyeong city government to an unidentified administrative office that handles part of the functions of the Ministry of Justice’s Korea Immigration Service was released online.

Basically, the document described how the city government planned to start a campaign to help older rural farmers marry through arranged blind dates with Vietnamese women studying in Korea. He had other details such as possible financial help for married couples through the initiative. The document was made public because the office shared it on social media. Soon, the controversial document generated concern and controversy on social networks. Immigrant and women’s rights groups criticized the city government for promoting transnational marriages as a means to help single older men marry and petitioned the NHRCK against the city government for discriminating against women. Vietnamese students. In its written opinion, the NHRCK said such an attempt to exploit immigrant women for population growth is based on the racist stereotype that Vietnamese women are “appropriate” to play certain gender roles. She also pointed out that the policy resulted from gender stereotypes that limit the role of women to that of giving birth and raising children. “Although the city government did not intend to discriminate against Vietnamese students, viewing them only as single farm wives in rural areas, regardless of their status as students, contains racist prejudice against them,” NHRCK said. This week, I read on some news site that by the year 2070, the population of South Korea is expected to decrease to 38 million people, currently around 52 million. However, every time I read something about it, I wonder why those who are in positions that could mean a change in this trend, do not do their job? The causes must be attacked, not the consequences! In other words, social and economic changes are urgently needed rather than offering palliatives to parents during, I believe, the first year of their children’s lives. If the easiest thing is to make babies, the most difficult thing is to raise them in a society where everything costs a fortune: health, housing and education are a dream for many people!! Credits The Korea Times