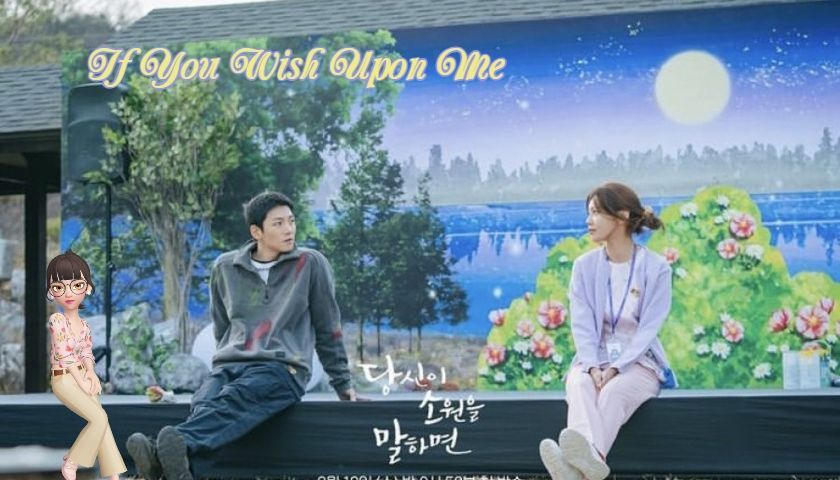 Unlike other healing series, KBS2’s “If You Wish Upon Me” does not attract the public. It’s a pretty good and meaningful drama, but unfortunately, not many people have allowed themselves to discover it. The first meeting between Yoon Gyeo-rye ( Ji Chang-wook ), who had just been released from prison, and Kang Tae-sik (Sung Dong-il) was not very nice. Kang Tae-sik was injured when Yoon Gyeo Rye, who was being chased by gangsters for money, almost crashed into the ambulance Kang Tae-sik was driving while transporting a patient, towards the East Sea, Yoon Gyeo Rye was forced to take the wheel of the ambulance, thus learning about the Genie Team that Kang Tae-sik is a member of. He couldn’t believe they granted hospice patients’ last wishes for free. Although that is something he is not interested in, Yoon Gyeo Rye, who was ordered to do community service to pay for his crime of causing a car accident, finally joins the Genie Team and takes care of terminally ill patients. Before joining Team Genie, happiness was nothing but a luxury for Yoon Gyeo Rye, who suffered a harsh childhood due to his father’s violence, then lived in an orphanage and was in juvenile detention centers and prison, and even he thought about ending his life. Maybe that’s why he still feels strange and uncomfortable with the warm and friendly energy of the Genie Team members. However, with the passage of time, the small light of hope begins to shine in his dark life, causing the desire to be happy to resurface, even for once in his life.

“If You Wish Upon Me” depicts the journey of the immature male lead as he grows up, as well as the stories of ordinary people who come together to give warm farewells to hospice patients in their last moments. The drama also evokes various emotions through the narrations of Ha Joon-kyung (Won Ji-an), who is related to one of Yoon Gyeo Rye’s sad past stories, Kang Tae-sik and Yoon Gyeo Rye’s unrevealed past, romance. with Seo Yeon-joo ( Choi Soo Young ) and relationships between Team Genie members. Although the story developments are sometimes a bit obvious, the drama is worth watching. In the drama, Team Genie shows a lot of affection for their patients. From a small effort to sprinkle snow in the middle of summer, to planning a performance with a famous musical actor, or renting the house where a patient lived before he passed away, their passion is shown in a “romantic” way, but problems are also addressed in more sophisticated ways. would be in the process. No matter what wish is granted, CPR is performed on a patient who has completed an advance directive. It was emphasized through various conflicts between Yang Chi-hoon (Shin Joo-hwan) and Team Genie that stopping the patient’s treatment without the consent of the family is not the right thing to do. The production team’s efforts to properly balance the “ideal” situation of the drama with the “reality” we live in have been outstanding. It is also worth paying attention to the performances of the leading actors. Ji Chang-wookwho has played various characters so far, is perfectly playing the role of Yoon Gyeo Rye, who needs comforting more than anyone else due to the serious and deep wounds he has. Sung Dong-il Y Choi Soo Young, who play Kang Tae-sik and Seo Yeon-joo, respectively, also reinvigorate the story with their stable acting skills that can change from realistic acting to serious and comedic acting. However, the fact that the drama is about the “ death ” is considered a barrier that prevents the work from approaching the public. No matter how warm and beautiful it is described, the impression given by the theme of “death” itself is already heavy and dark. Therefore, its new element and somewhat calm-flowing developments may be other reasons contributing to the drama’s disappointing ratings. Nevertheless, “If You Wish Upon Me» still has many opportunities to recover. The touching human stories of Team Genie will continue to lead the drama, but the emotional situations they face around their patients will continue to affect them. Could it be that Ha Joon-kyung and Kang Tae-sik are related to each other? Will we understand why most of the Genie team has to protect the patient in room 403? What will be the use for Yoon Gyeo Rye and Ha Joon Kyung’s money? Will they be able to free themselves from the criminals who persecute them? Will Yoon Gyeo Rye and Seo Yeon Joo be able to find happiness together? Hopefully the drama fulfills its goal of “healing” with an end of growth and peace for all the leads, especially for the most tormented character Yoon Gyeo Rye, that would be a reason for the drama to get the attention of the public, to me It seems to me that this story is very worthwhile, especially because they have not focused on what would be most obvious: people about to die and their unfulfilled wishes. Credits Kbizoom