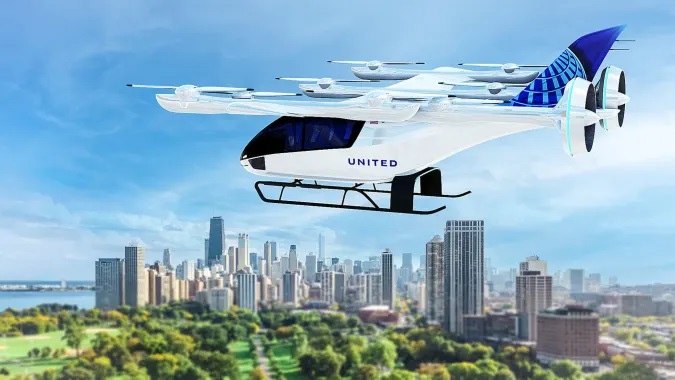 United Airlines is entering the air taxi market. They have already ordered 200 flying machines from Eve Air Mobility, which will enter commercial use in 2026. The streets of our cities are increasingly congested and it takes a long time to reach a specific location. More and more companies are striving to move passenger transport into the air, where traffic jams do not exist and you can quickly reach your destination. A lot of companies are working on the development of flying taxis and there are also companies interested in using them commercially. One of them is the American airline United Airlines, which intends to offer customers this form of transport in a few years. The airlines had previously invested $ 15 million in Eve Air Mobility, and now ordered 200 flying taxis, with the option to purchase another 200. The plan is to put them into service as early as 2026. A flying vehicle designed by engineers from a Californian company can carry four people on board. It has conventional wings with rotors for lift, while at the rear there are two motorized propellers that enable flight. Everything is powered by electric motors. According to the manufacturer, this design reduces noise by as much as 90% compared to conventional aircraft. In addition, the vehicle can take off and land vertically, and its range is approximately 100 km. This is not United Airlines’ first investment in flying taxis. Last year, the company invested $ 10 million in California-based Archer, ordering 100 vehicles from it. In total, it will therefore have 500 such taxis at its disposal, which will enable the rapid transport of passengers. For now, it is too early to talk about the cost of such a service. However, it should be expected that they will be much higher than traditional taxis.